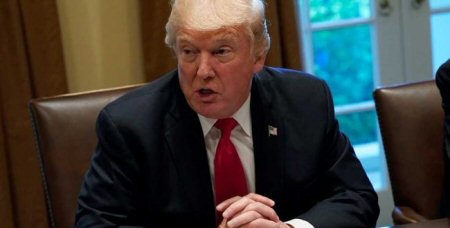 US President Donald Trump says that he will not go ahead with his controversial pledge to move the American embassy to Jerusalem, as he wants to give a shot at achieving peace between Palestine and Israel, he said on a TV show, “I want to give that a shot before I even think about moving the embassy to Jerusalem.,” referring to the current efforts for the peace process between the two sides.

Trump noted that his administration was working on a plan for peace between the two sides.

Foreign countries currently have their embassies Tel Aviv since they do not recognize Israel’s unilateral claim of control over all of Jerusalem, according to the PNN.

Israel occupied east Jerusalem and the West Bank in 1967, and illegally annexed east Jerusalem, in a move which is disapproved by the international community. This causes problems on almost a daily basis in Jerusalem including settlers raiding Al-Aqsa Mosque and Israeli soldiers illegally seizing houses and lands in the Jerusalem area.

In June, Trump signed a temporary order to keep the U.S. embassy in Tel Aviv, despite a campaign promise he made to move it to Jerusalem. “If we can make peace between Palestine and Israel, I think it’ll lead to ultimately peace in the Middle East, which has to happen,” he said.

“We’re gonna make a decision in the not too distant future,” Trump said. But, for now, the peace push comes first.