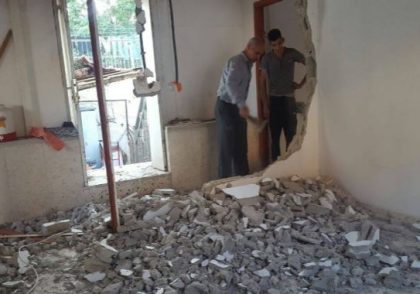 The Israeli-run Municipality of Jerusalem delivered at least 12 home demolition notices to Palestinian residents in the city’s Al-‘Isawiya neighbourhood, on Wednesday, the Middle East Monitor reported.

The notices were issued under the pretext that the homes were built without a permit, rarely granted to Palestinians by the Israeli occupation authorities, especially in occupied East Jerusalem.

Muhammad Abu Al-Hummus, activist and member of local follow-up committee, explained that teams from the Israeli municipality took pictures of more than 50 buildings and homes in and around the neighbourhood.

Some of the places where demolition notices were issued have been identified as Abu Al-Homs, Al-Dhahra, Abu Riyala, Al-Shaheed Yasser Arafat Street, Muhaisen neighbourhood and Olayan neighbourhood.

Abu Al-Hummus pointed out that Israel has increased the rate of destroying Palestinian homes, and noted that some of the buildings earmarked for demolition were built nearly 25 years ago.

He also confirmed that having Israeli Jerusalem Municipality staff entering the town and issuing demolition notices is part of a widespread campaign to change the demographics of the Holy City and make space for more illegal settlers. Hence the attacks on Palestinians and the demolition of their homes on a regular basis.