Two Days After Her Release, Female Detainee With Hydrocephalus Suffers A Stroke 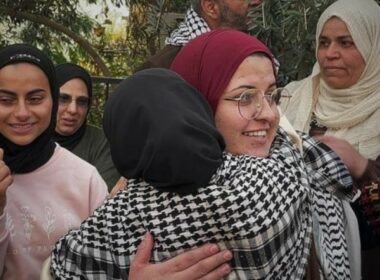 Just two days after her release from an Israeli prison and being denied medical treatment while imprisoned, a Palestinian female detainee with Hydrocephalus suffered a stroke and was rushed to a hospital in Jenin.

Media sources said ina Jaradat, 24, from the northern West Bank city of Jenin, suffered a stroke and was rushed to a hospital in Jenin, especially after she was denied the needed medical treatment while in prison and could not have access to certain vital medications.

Jaradat was released Friday and was rushed to a Palestinian hospital an hour after reaching her family’s home, then again Saturday.

She spent several months in Israeli prisons without treatment for her Hydrocephalus (a condition in which an accumulation of cerebrospinal fluid (CSF) occurs within the brain).

Jaradat started feeling numbness in her arms, legs, and the right side of her face and could not move before the Palestinian doctors performed a battery of tests.

She told her doctors that when she was feeling symptoms while imprisoned and asked for aspirin, but the request was constantly denied despite explaining her condition to her jailors and why it was essential she gets the medicine.

“When I was released, they took me from the prison and placed me in the transport van that was cold and lacked proper ventilation and seats, and kept me in there for four hours before taking me to the Salem military roadblock where my family was waiting for me,” Jaradat stated, “When I was released, I was fatigued and had pain all over my body, so I didn’t notice that anything else might be going on until I collapsed.”

“When I was in prison, I needed medical treatment, but they ignored that; I was in need of a procedure to remove excess liquid from the spine, and they only transferred me to the hospital after my health sharply deteriorated and after other female detainees protested…” she added, “I was later moved to Rambam Israeli medical center but while in the transfer van my hands were cuffed and my feet were shackled. I was moved back to prison shortly after the doctors performed the procedure without being able to rest and recover….”.