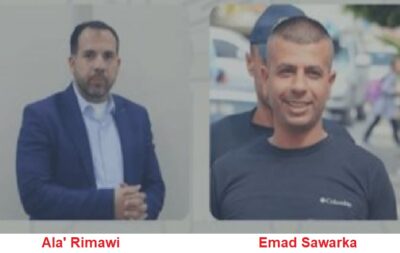 The Palestinian Prisoners’ Society (PPS) has reported that two detainees, imprisoned by Israel, are ongoing with hunger strike despite deteriorating health conditions, protesting their ongoing arbitrary Administrative Detention, without charges or trial.

The two detainees are Emad Sawarka, 37, from Jericho, and journalist Ala’ Rimawi, 43, from Ramallah, in the occupied West Bank.

The PPS stated that Sawarka started his hunger strike 49 days ago, and is currently at the Ramla prison clinic, which lacks adequate equipment and specialists after he was transferred from solitary confinement in Asqalan prison.

It added that Sawarka is facing serious complications but is ongoing with the strike despite Israel’s rejection of his demands. He lost a lot of weight and is unable to able to walk or stand.

The PPS also said the journalist Ala’ Rimawi continues his strike, which he started on the first day of his abduction by the soldiers fifteen days ago and is currently held in solitary confinement in Ofar prison despite health complications.

A lawyer working for the PPS recently visited Rimawi and said the detainee frequently loses consciousness, in addition to suffering several types of pain in his body, especially since he was still recovering from a coronavirus infection when he was taken prisoner.

The PPS stated that Israel deliberately ignores the demands of the hunger-striking detainees to force them or have them end their strikes due to their serious complications, however, the detainees remain determined to continue the strike.

It also denounced Israel’s ongoing usage of the arbitrary Administrative Detention orders against hundreds of detainees, holding them captive without charges or trial for months, and in some cases for years.

The PPS also said that most of the detainees, who are held under the Administrative Detention orders, are former political prisoners, some of them spent more than fifteen years in prison after being abducted and imprisoned several times.

It called on local, regional, and international human rights groups and legal organizations to perform their duties, and pressure Israel into stopping its violations and ending its usage of the illegal Administrative Detention policy.

It is worth mentioning that Sawarka, a married father of five children, was abducted in July of 2020, and previously spend ten years in Israeli prisons.

In addition, the detained journalist Rimawi, also a married father of five children, was abducted on April 21st, 2021, was instantly slapped with an Administrative Detention order. He is also a former political prisoner who spent more than eleven years in Israeli prison.

According to data by the Ad-Dameer Prisoner Support and Human Rights Association, Israel is holding captive 4450 Palestinians, including 140 children, 37 women, in addition to 440 detainees who are held under the Administrative detention orders.