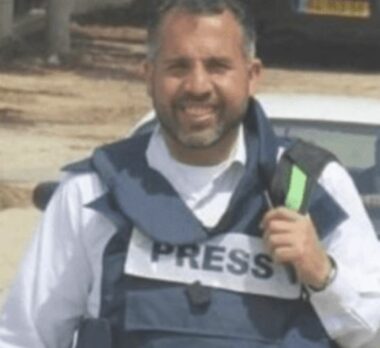 The administration of Ofer Israeli prison moved the detained Palestinian journalist, Ala’ Rimawi, 43, into solitary confinement as he continues his hunger strike, protesting his detention, for the seventh day.

The Palestinian Prisoners’ Society (PPS) said the imprisoned journalist started the hunger strike just hours after the soldiers abducted him a week ago.

The PPS added that the detainee has several health issues that he was receiving treatment for prior to his abduction and was placed in a clinic belonging to the Israeli Prison Administration before he was moved into solitary confinement.

Rimawi was abducted from his home, in the central West Bank city of Ramallah, and was slapped with an Administrative Detention order, without charges or trial.

It is worth mentioning that Rimawi, a married father of five, is also a former political prisoner who spent about eleven years in Israeli prisons, detention, and interrogation facilities.

It is worth mentioning that two other detainees are ongoing with hunger strikes: Emad Sawarka, 37, for the 41st day, and Mos’ab al-Hoor, 33, for the 15th day, protesting their arbitrary Administrative Detention.

Sawarka, a married father of five, is from Jericho city, and is a former political prisoner who spent about ten years in Israeli prisons.

Al-Hoor, a married father of one child, from Hebron, was abducted in November of the year 2019, and started the hunger strike 15 days ago. He also spent over ten years in Israeli prisons during previous abductions and detentions.