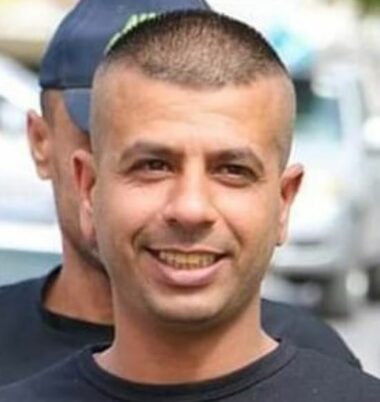 The Palestinian Prisoners’ Society (PPS) has reported, Wednesday, that the hunger-striking detainee Emad Sawarka, from Jericho, has lost more than 18 kilograms of his weight, and is unable to walk.

The PPS stated that one of its lawyers managed to visit with Sawarka, Tuesday, and said that the detainee was brought to him in a wheelchair, as he is unable to walk or even stand.

It added that Sawarka is facing several complications due to his strike, which continues to the 42nd day, but is determined to continue the strike, protesting his arbitrary Administrative Detention, without charges or trial.

The PPS stated that, besides Sawarka, detainee Mos’ab al-Hoor, 33, from Hebron in southern West Bank, continues his strike for the sixteenth day in solitary confinement in the Negev Detention camp, in addition to the detained journalist, Ala’ Rimawi, 43, held in Ofer prison and continues the strike for the eighth day. Rimawi declared a hunger strike on the first day of his abduction by the soldiers.

The PPS called for supporting the detainees, especially those held under the arbitrary Administrative Detention orders, particularly since Israel has recently escalated its abduction of social and political activists, in addition to journalists.

It also called on various international groups, especially legal and human rights organizations and the United Nations to practice serious pressure on Israel to stop its violations and to end the use of Administrative Detention.