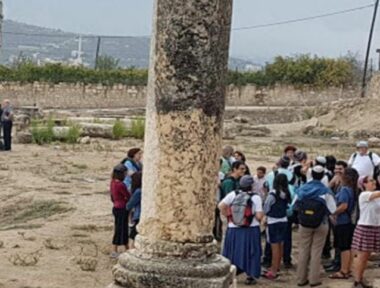 On Wednesday, many Israeli colonialist settlers, accompanied by soldiers, invaded the archeological site in Sebastia Palestinian town, north of the northern West Bank city of Nablus.

Sebastia Mayor, Mohammad Azem, said the soldiers closed many roads leading to the site and prevented the Palestinians from approaching it.

Azem added that the soldiers also invaded many Palestinian homes, and occupied their rooftops to use them as monitoring posts before several army jeeps accompanied the colonists’ cars and buses into the village and headed to the site.

It is worth mentioning that, nearly four months ago, the colonists set a schedule to visit the site every Wednesday, under heaving military presence.

The soldiers frequently invade Sebastia to accompany groups of illegal Israeli colonialist settlers into the archeological site, an issue that leads to protests, and injuries.

Earlier Wednesday, the soldiers abducted a Palestinian man from his home in Hebron city, in the southern part of the occupied West Bank.

On Wednesday at dawn, the soldiers abducted, two former political prisoners from their homes near Bethlehem, south of the occupied Palestinian capital, Jerusalem, in the West Bank.

In the Gaza Strip, the Israeli navy ships attacked, on Tuesday at night, a small Palestinian fishing boat near the al-Waha shore, west of Beit Lahia, in northern Gaza, wounding a fisherman, and fired live rounds, on Wednesday morning, at farmers near Khan Younis, in the southern part of the coastal region.