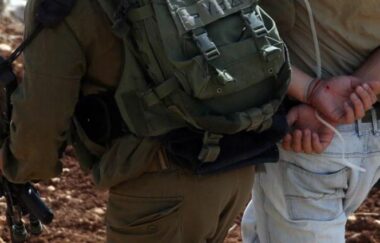 Israeli soldiers abducted, earlier Wednesday, a Palestinian man from his home in Hebron city, in the southern part of the occupied West Bank.

They added that the soldiers abducted Mohammad Hilmi Abu Safiyya, from his home, and took him to a nearby military base.

The soldiers also closed several roads in Hebron city, in addition to nearby villages and towns, before stopping and searching cars, and interrogated many Palestinians while inspecting their ID cards.

On Wednesday at dawn, the soldiers abducted, two former political prisoners from their homes near Bethlehem, south of the occupied Palestinian capital, Jerusalem, in the West Bank.

In the Gaza Strip, the Israeli navy ships attacked, on Tuesday at night, a small Palestinian fishing boat near the al-Waha shore, west of Beit Lahia, in northern Gaza, wounding a fisherman, and fired live rounds, on Wednesday morning, at farmers near Khan Younis, in the southern part of the coastal region.