Soldiers Abduct Eight Palestinians, Including Medic, Attack Many, In Jerusalem 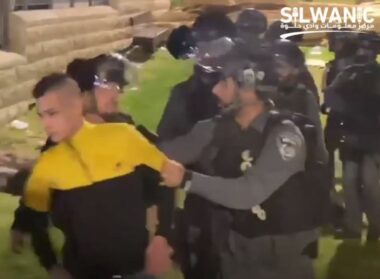 Israeli soldiers abducted, on Tuesday at night, eight Palestinians, including one medic and four children, and assaulted many others in Bab al-‘Amoud and surrounding areas, in the occupied Palestinian capital, Jerusalem.

Eyewitnesses said the soldiers and police officers assaulted dozens of Palestinians near Bab al-Amoud and chased many others while firing gas bombs and concussion grenades.

The Al-Amal Society for Medical Services in Jerusalem, said the soldiers abducted one of its medics, identified as Luay Za’atra, while he was rendering first aid to wounded Palestinians.

The soldiers also abducted Mansour Mahmoud, 26, after invading and ransacking his home in the al-‘Isawiya town, in Jerusalem.

It is worth mentioning that, last Saturday evening, Mahmoud suffered various wounds to several parts of his body after Israeli soldiers assaulted him with clubs and batons, while he was leaving the Al-Aqsa Mosque.

Furthermore, the Wadi Hilweh Information Center in Silwan (Silwanic) said the number of Palestinians, who were abducted by the soldiers and the police on Wednesday evening and at night, has arrived to eight, after the soldiers abducted four children.

The Israeli attacks and the abductions of the Palestinians came as hundreds gathered in the yards of Bab al-‘Amoud to celebrate the removal of the Israeli military roadblocks in the area following ongoing protests that started on the first day of the holy Muslim month of Ramadan, when the army and the police carried out a serious escalation against the Palestinians, especially in and around the Al-Aqsa Mosque, and prevented hundreds of Palestinians from entering the holy site.

In related news, the soldiers caused many Palestinians to suffer the effects of tear gas inhalation, after the army attacked protesters at the northern entrance of the al-Biereh city, in central West Bank.