Soldiers Injure Several Palestinians In Ramallah And Bethlehem, Abduct One 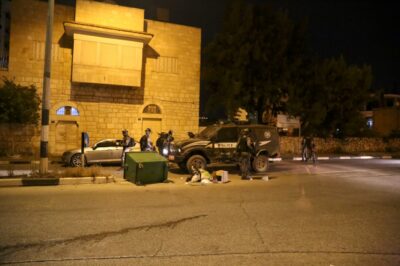 Israeli soldiers injured, on Tuesday evening, many Palestinians in Ramallah and Bethlehem, in the occupied West Bank, and abducted a young man.

Media sources in Ramallah, in central West Bank, said the soldiers attacked Palestinian protesters at the northern entrance of the al-Biereh city, and fired a barrage of gas bombs and concussion grenades at them.

They added that many Palestinians suffered the effects of tear gas inhalation, in addition to cuts and bruises, before receiving the needed treatment by local medics.

The soldiers also attacked Palestinian protesters at the northern entrance of Bethlehem, south of occupied Jerusalem, and fired many concussion grenades, gas bombs, and rubber-coated steel bullets at them.

The Israeli attack caused many injuries among the Palestinians, while the soldiers also chased and abducted a young man.

On Tuesday at night, the soldiers abducted eight Palestinians, including one medic and four children, and assaulted many others in Bab al-‘Amoud and surrounding areas, in the occupied Palestinian capital, Jerusalem.