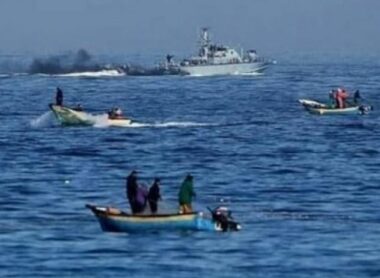 Israeli navy ships attacked, on Tuesday at night, a small Palestinian fishing boat near the al-Waha shore, west of Beit Lahia, in northern Gaza, wounding a fisherman. On Wednesday morning, the soldiers fired live rounds at farmers near Khan Younis, in the southern part of the coastal region.

Media sources said the young fisherman was fishing on a small boat not far from the al-Waha shore when the navy fired rubber-coated steel bullets at him.

They added that the fisherman suffered mild wounds, and received the needed treatment by Palestinian medics before being moved to a nearby hospital.

It is worth mentioning that, three days ago, the navy imposed a strict siege on Palestinian territorial waters in the besieged Gaza Strip, and carried out numerous violations against the fishermen who are just trying to fish to provide for their families.

In addition, the soldiers fired many live rounds at farmers on their lands near the perimeter fence, east of Khuza’a town, east of Khan Younis, in the southern part of the Gaza Strip.

The attack did not lead to casualties but forced the Palestinian farmers to leave their lands in fear of further Israeli escalation.

The latest attacks are part of frequent Israeli violations against the Palestinians, especially the fishermen, farmers, shepherds, and workers in the besieged and impoverished Gaza Strip, and have led to dozens of casualties, including fatalities, in addition to serious property damage and the confiscation of many boats after abducting the fishermen.