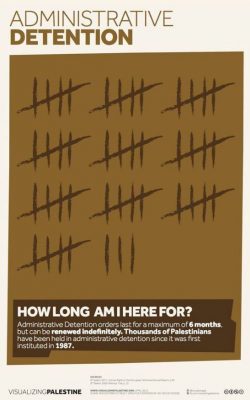 Luay Akka, a lawyer with the Palestinian Detainees’ Committee, stated Sunday that two detainees have suspended their hunger strikes after reaching agreements with the Israeli Prison Authority, ending their arbitrary Administrative Detention, holding them captive without charges or trial, while three others continue their strike, demanding their freedom.

Akka said the two detainees, Khader ad-Dalo and Salim Rajoub, have suspended their strike after receiving assurances that their current Administrative Detention orders will not be renewed again.

He added that the two detainees started the hunger strike ten days ago, along with Mahmoud Ayyad, Islam Jawareesh and Issa Awad, who continue their open-ended hunger strike demanding their release.

Akka further stated that Salim Rajoub, from the southern West Bank city of Hebron, already served two administration detention orders, each for six months, and added that Khader ad-Dalo, from Bethlehem, has been held under the same orders for more than twelve months.

Furthermore, detainee Islam Jawareesh, from Aida refugee camp, north of Bethlehem, Issa Awad and Mahmoud Ayyad from Deheishe refugee camp, south of the city, have been held under Administrative Detention orders for the past eighteen months.

It is worth mentioning that 450 Administrative Detainees have been boycotting Israel’s Administrative Detention court since February 15, 2018, demanding an end to this illegal policy, holding them captive for extended periods, without charges under the alleged “secret files” which neither they, nor their lawyers, have access to or can know anything about their contents.