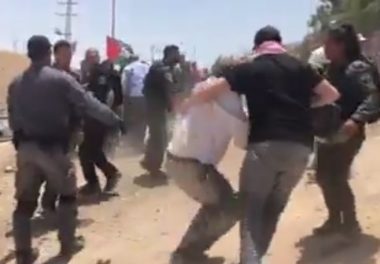 The soldiers installed the two iron gates to block entry to the community, which is illegally stalled for demolition by the army, to serve Israel’s illegal colonialist construction and expansion activities.

The new gates, and the extensive military and police deployment in the area, left the village completely surrounded, while the remaining way for locals and peace activists is on foot, through the mountains.

After several court sessions, and appeals to halt the demolition of the Bedouin community, the Israeli Supreme Court issued orders temporarily halting the demolition, and now, lawyers of the Popular Committee against the Annexation Wall and Colonies are hoping to obtain a new ruling, halting the destruction until August 15th.

The army has been surrounding al-Khan al-Ahmar, home to 181 Palestinians, at least half of them are children, since the beginning of this month.

Dozens of local, Israeli and international peace activists have been constantly present in the village, and were repeatedly attacked, and injured, by the soldiers and police officers, while many others have been taken prisoner.

The entire village is set to be razed to the ground by military forces under the ‘E1 Jerusalem Plan’ meant to encircle the eastern part of Jerusalem with Israeli colonial settlements to encircle Jerusalem and claim it for Israel, denying the Palestinian people’s historical and ongoing claim to the city.