Two Hours After His Release, Israeli Soldiers Abduct A Palestinian From Jerusalem 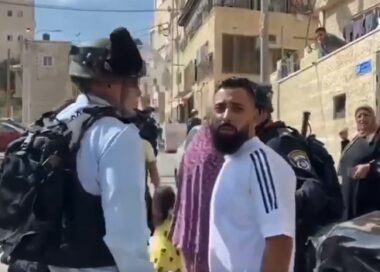 Israeli soldiers abducted, on Tuesday evening, a young Palestinian man from his home in the al-Isawiya town, in occupied Jerusalem, just two hours after his release from prison after spending more than 6 years in captivity.

Eyewitnesses in al-Isawiya stated that the soldiers invaded the home of Amer Obeid, after surrounding the entire area, and abducted him before moving him to an interrogation facility in Jerusalem.

They added that the abducted Palestinian served of prison sentenced of 6.5 years, before he was released and went home, however, just a few hours later, the soldiers invaded the property and abducted him, and his father.

It is worth mentioning that, on Tuesday morning, the soldiers invaded Obeid’s home, searched the property, and confiscated posters in and around the property, welcoming Amer back home.