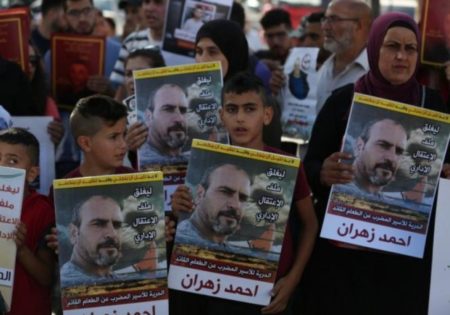 The Palestinian Commission of Detainees’ and Ex-Detainees’ Affairs warned, on Monday, of the deteriorating health conditions of hunger striking Palestinian prisoners Ahmad Zahran and Mosab al-Hindi, who are imprisoned at Israeli Nitzan jail.

The commission confirmed that the conditions of the two prisoners are getting worse every day, adding that the prison administration pays no attention to their suffering and continues to reject their demand of ending their administrative detention.

The commission indicated that 42-year-old prisoner Ahmad Zahran, a resident of Deir Abu Mash’al village, to the west of Ramallah, is experiencing extreme health difficulties, as he has been on hunger strike for 58 days in a row.

It pointed out that Zahran has lost over 20kg of his weight, adding that he suffers from body weakness and fatigue, and cannot move unless he uses a wheelchair.

As for the 29-year-old Musab al-Hindi, a resident of Tell town, to the southwest of Nablus, the commission said that he has been on hunger strike for 56 days.

It pointed out that he suffers from constant exhaustion, complains about dizziness and continuous vomiting. He is  rejecting any medical checkups.

According to Palestinian figures, about 5,700 Palestinians, including 48 women and 250 children, are currently languishing in Israeli detention.

Al Ray Palestinian Media Agency further notes that about 500 Palestinians are currently being held under Israel’s illegal policy of administrative detention, under which prisoners can be held for renewable six-month periods without charge or trial.