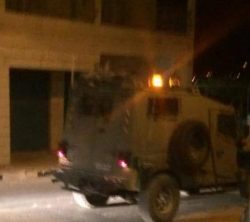 Palestinian medical sources have reported that two workers were injured, on Thursday morning, after Israeli soldiers assaulted them, near Bethlehem, while trying to enter occupied Jerusalem for work.

The sources said that the two workers are from the al-’Obeydiyya town, east of Bethlehem, and have been identified as Mohammad Jamil Radayda, 22, Jihad Jamal Radayda, 21.

The soldiers chased and assaulted them in Wadi Abu al-Hummus area, near the al-Khass village, east of Bethlehem. The army claimed that the two workers were trying to enter Jerusalem without a permit.

The two were repeatedly hit and kicked by the soldiers, and suffered various fractures, cuts and bruises to different parts of their bodies, and were transferred to Beit Jala governmental hospital, suffered moderate injuries.

It is worth mentioning that Wadi Abu al-Hummus area became a site of repeated Israeli military assaults against dozens of workers, including some who were recently shot and injured.