Army Transfers Body Of Slain Palestinian Child To His Family 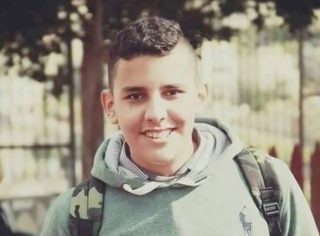 On Wednesday, the Israeli military transferred the corpse of the slain Palestinian child, who was killed by army fire, on Tuesday at dawn, back to his family in the central West Bank district of Ramallah.

The child, Mahmoud Badran, 14, was killed after the soldiers opened fire on a Palestinian car, driving to Beit ‘Or at-Tihta village, west of Ramallah, after he and his friends swam in a pool in Beit Sira nearby village.

The fatal shooting took place close to the Ofer Israeli prison and military base, built on Palestinian lands belonging to Betunia residents, west of Ramallah. The military initially claimed that the child was among several Palestinians, who allegedly hurled stones and a firebomb on Israeli cars on the highway between Jerusalem and Modi’in illegal colony, built on Palestinian lands, west of Ramallah.

It later admitted that the child was just a bystander, and had nothing to do with the alleged incident. The soldiers fired many live rounds, killing Badran and wounding at least four other Palestinians.

The funeral ceremony of the slain child will be held on Thursday afternoon, in Beit ‘Or at-Tihta, local sources said.