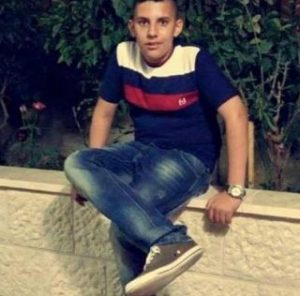 Following the fatal shooting of a Palestinian child on the hands of Israeli soldiers, earlier Tuesday, the Israeli army admitted that the child was a bystander, and that he was shot dead allegedly after Palestinians hurled stones on Israeli vehicles. He was in a car that was targeted by the army, while driving on the same road.

In a statement, the Israeli army said the child, Mahmoud Rafat Badran, 14, was “traveling by car with his family, when some Palestinians hurled stones and a firebomb” on the highway between Jerusalem and Modi’in illegal colony, built on Palestinian lands, west of the central West Bank city of Ramallah.

The slain child was returning back home, along with his friends, after swimming in a pool in Beit Sira nearby village.

Israeli daily Haaretz quoted the army saying some Palestinians apparently spilled oil on the highway, and hurled stones on an Israeli bus, and cars.

It added that one Israeli, traveling on a bus, and two foreigners traveling by car, suffered mild wounds, when several Palestinian youngsters hurled stones on the vehicles.

An israeli army officer, and a number of soldiers, were driving in the area and starting chasing Palestinians, and fired several live rounds targeting a Palestinian car that happened to be driving on the same road.

Several Palestinians were also shot and wounded by the Israeli fire, while the military was unable to determine whether the wounded Palestinians had anything to do with the “stone throwing incidents.”

The army said it initiated a probe into the incident, and that the investigation will continue by the Binyamin battalion, operating in the Ramallah district.

The army claimed several Israeli cars sustained damage in stone-throwing incidents in the area, but all managed to continue the drive to Maccabim Israeli military roadblock, and reported the incidents to the soldiers.

On Tuesday at dawn, the soldiers invaded various Palestinian communities in several districts in the occupied West Bank, stormed and searched dozens of homes, and kidnapped at eleven Palestinians, the Palestinian Prisoners Society (PPS) said. One Palestinian was kidnapped on Monday evening.