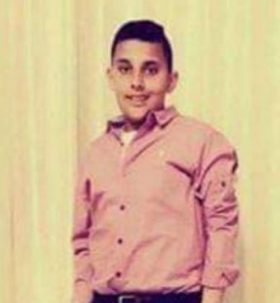 Israeli soldiers shot and killed, on Tuesday at dawn, a Palestinian child from Beit ‘Or at-Tihta village, west of the central West Bank city of Ramallah, and injured at least four others. The attack took place close to Beit Liqya nearby town.

The Palestinian Health Ministry has reported that the slain Palestinian child has been identified as Mahmoud Rafat Badran, 14.

|Army Admits Slain Palestinian Child Was A Bystander  June 21, 2016 12:56 PM| The slain child was returning back home, along with his friends, after swimming in a pool in Beit Sira nearby village.

It added that the soldiers also shot and injured four other young Palestinians; three of them were moved to the Palestine Medical center in Ramallah, suffering moderate-to-serious wounds, while a fourth was taken by the army, and the extent of his injury remained unknown.

The Israeli army claimed that the soldiers opened fire on several Palestinians, who reportedly hurled stones on military vehicles and settler’s cars, driving on a nearby bypass road.