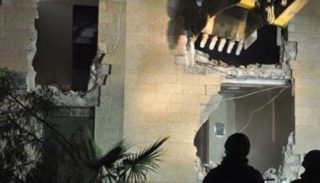 Dozens of Israeli soldiers invaded, on Tuesday at dawn, Hajja village, east of the northern West Bank city of Qalqilia, and demolished the inner walls of a home of a Palestinian who was killed in March after carrying out a fatal stabbing attack in Jaffa.

Media sources in Qalqilia said the soldiers, accompanied by armored bulldozers, invaded the village, and surrounded the home of Bashar Masalha, 22, before forcing the family out, and demolished the inner walls of their property.

The army did not demolish the entire property because it is a three-story building, owned by several families, and instead demolish the inner walls of Masalha’s family home, rendering the family homeless.

It is worth mentioning that Masalha was shot and killed on March, 8, 2016, and the army held his body until May 20th.

A U.S. army veteran of Iraq and Afghanistan wars, identified as Taylor Force, 28, was killed in the attack, and several Israelis were injured, Israeli sources said.