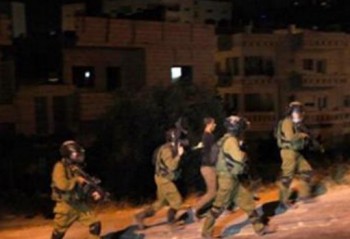 Israeli soldiers invaded, on Tuesday at dawn, various Palestinian communities in several districts in the occupied West Bank, stormed and searched dozens of homes, and kidnapped at eleven Palestinians, the Palestinian Prisoners Society (PPS) said. One Palestinian was kidnapped on Monday evening.

The soldiers violently searched the invaded homes, and interrogated the families, before kidnapping the four Palestinian youngsters.

Also, the Hebron office of the PPS has reported that the soldiers invaded the ath-Thaheriyya town, south of the city, in the southern part of the occupied West Bank, also searched homes and kidnapped a Palestinian man, identified as Yousef Mohammad Nofal Samasra, 45.

In addition, the Nablus office of the PPS, in the northern part of the occupied West Bank, has reported that dozens of soldiers invaded Beita town, south of the city, searched homes and kidnapped four Palestinians, identified as Waleed Ahmad ‘Odeili, 23, Mahdi ‘Atef Dweikat, 18, Ahmad Abdul-Karim Dweikat, 20, and Bassem Abdul-Latif Dweikat, 24.

The soldiers also invaded Huwwara town, south of Nablus, detained and interrogated a number of young men for several hours, and released them later.

In related news, the soldiers invaded Hijja village, east of the northern West Bank city of Qalqilia, and demolished the inner walls of a home of a Palestinian who was killed in March after carrying out a fatal stabbing attack in Jaffa.

In addition, the army killed, on Tuesday at dawn, a Palestinian child, identified as Mahmoud Rafat Badran, 15, from Beit ‘Or at-Tihta village, west of the central West Bank city of Ramallah, and injured at least four others. The attack took place close to Beit Liqya nearby town.

On Monday at night, the soldiers invaded a Palestinian articular land, close to the Annexation Wall in the al-Jalama village, near the northern West Bank city of Jenin, and confiscated a tractor belonging to a local villager.