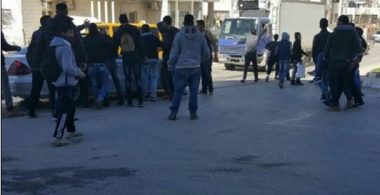 Medical sources said one Palestinian suffered a life-threatening wound, after the soldiers shot him with a live round in the chest. Palestinian medics moved him to a hospital in Jerusalem.

They added that the soldiers also shot another Palestinian, with a live round in his leg, before medics moved him to a hospital in Ramallah, suffering a moderate injury.

The clashes erupted after dozens of soldiers invaded Kafr Aqab and Qalandia refugee camp, and initiated extensive searches of homes, while interrogating many residents. The soldiers also broke into, and searched many stores.