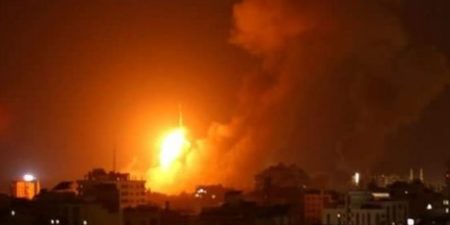 Palestinian sources said, according to the PNN, that an Israeli reconnaissance aircraft fired two missiles at a site in the town of Beit Lahia, followed by an F16 raid on the same site  a few minutes later.

No injuries were reported during the raids.

Israeli Prime Minister Benjamin Netanyahu said, Wednesday evening, that Tel Aviv was on its way to destroy the rule of Hamas, as he put it.

Netanyahu was asked, in a lengthy interview by Channel 7, “what had happened to his promise in 2009 that he would destroy Hamas’s rule.”

The prime minister said: “We are working on this, unfortunately we cannot avoid the military operation, I run a group of areas, and we work in all those areas.” It is noteworthy that Netanyahu already threatened, several times, that his army is preparing for a large-scale military operation in the Gaza Strip.

More info as it surfaces.