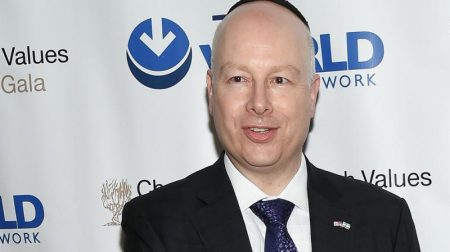 The remarks of US ambassador to Israel David Friedman, made during his presence in the illegal settlement of Sderot, are a direct aggression and explicit incitement against the Palestinian people, a spokesman for the Hamas resistance movement stated.

Bassem Naim, a member of the movement’s international relations office, said, in a written statement, that the words of US ambassador to Israel, David Friedman, on the borders of the Gaza Strip, by which he asserted that Jews will remain in this land forever, and that his government does not mind attacking the Gaza Strip, reflects his extremist mentality, not a stance of the ambassador of a state claiming neutrality and mediation for peace and stability.

He added that his statement is unacceptable, condemned, and that Hamas considered it a direct aggression and incitement against the Palestinian people which affects international efforts to resolve the conflict and achieve stability in the region.

He noted that the US extremist stance promoted not just Israel;s racist policy, based on annexation of the Palestinian territories, Judaization and continued aggression against the Palestinian people, but also provided a protection for Israel, to escape from prosecution and accountability for crimes committed against Palestinians.

Friedman, a lawyer and son of a rabbi, was appointed in December of 2016, as US ambassador to Tel Aviv. He has repeatedly expressed doubts about the possibility of a two-state solution between the Palestinian Authority and the Israelis.

Friedman, a right-wing extremist , is a staunch supporter of Israeli settlement construction in Jerusalem, supports settlement expansion in the occupied West Bank, and sees settlements in the West Bank as legal, contrary to the position of successive US administrations that have long viewed them as an obstacle to peace with the Palestinians.

Friedman, along with US special envoy to the Middle East Jason Greenblatt, participated in the opening ceremony of a tunnel located to the south of Al Aqsa Mosqu,e in occupied Jerusalem.

At that time, Hebrew newspaper Haaretz reported, according to Al Ray, that the participation of Friedman and Greenblatt come at the invitation of “Elad,” a settlement association which seizes Palestinian property in Jerusalem, and oversees about 70 outposts in the town of Silwan.