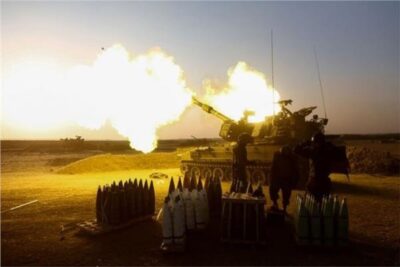 In the pre-dawn hours on Sunday, two rockets were launched from Gaza into Israel in what some commentators are saying was a malfunction in the launching mechanism due to the overnight thunderstorms in Gaza.

No injuries or damage resulted from the two rockets. Israeli forces immediately responded with a barrage of artillery fire in different parts of the Gaza Strip, as well as missiles dropped from helicopters.

The two rockets were launched from Gaza at approximately 2:00 AM. Israeli sources report that alarms sounded in Kibbutz Palmachim and in the city of Ashdod, in southern Israel. At least one of the two rockets was reportedly intercepted by the Israeli anti-rocket defense system.

Israeli forces then launched widespread attacks in the northern, central and southern Gaza Strip. Local sources report that Israeli tanks stationed at the northern border of the Gaza Strip fired a barrage of artillery fire toward the town of Beit Lahia, in northern Gaza.

In addition, Israeli warplanes and helicopters carried out airstrikes on Palestinian farmland east of Rafah, in the southern Gaza Strip.

Israeli news channel 7, as well as the Israeli paper Maariv, reported that Israeli military officials had not ruled out the possibility that the rocket launching from Gaza may have been a mistake caused by the thunderstorm.

Israeli authorities told reporters that they had been preparing for a possible escalation with the Palestinians, since Thursday marked the one-year anniversary of the extrajudicial assassination of Islamic Jihad military commander Baha Abu al-Ata in Gaza City on November 12, 2019.

Extrajudicial assassinations are forbidden under international law, but Israeli forces frequently carry out such assassinations against Palestinian leaders with impunity.