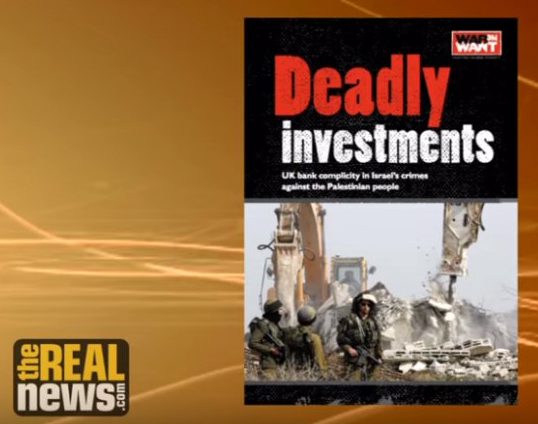 A new report from War on Want reveals that some of the UK’s top banks and financial institutions are investing in companies known to supply Israel with weapons and technology used in the oppression of Palestinians.

Ryvka Barnard, Senior Campaigns Officer (Militarism and Security) Ryvka campaigns against human rights abuses associated with the growing power of the military and security industry, with a special focus on the UK-Israel arms trade. She speaks and writes prolifically on the global grassroots movement for Palestinian rights. Ryvka has a PhD in Middle Eastern Studies from New York University where she specialised in the politics of tourism development in the occupied West Bank.

Sharmini Peries: It’s The Real News Network. I’m Sharmini Peries coming to you from Baltimore. In the 50 years that Israel has occupied the Palestinian territory, the Israeli military has used a variety of ways and means to repress Palestinian resistance. Israel not only imports weapons and ammunition, but it also developed a massive arm’s industry to do this. Keeping millions under control is a costly endeavor and would not have been possible without billions in foreign investments. Many of those investments are made by British banks and this is the topic of a new report published by War On Want titled, “Deadly Investments: UK bank complicity in Israel’s crimes against the Palestinian people.” This report deals not only with the military occupation of Palestinians, but also with other means of repression, including Israeli apartheid policies toward Palestinians. The report was written by Michael Deas and Ryvka Barnard. Ryvka Barnard joins us today from London to discuss the report. She is the Senior Global Justice Campaign’s officer and Senior Campaigner on Militarism and Security at War On Want. Thanks for joining us, Ryvka.

Ryvka Barnard: Thanks for having me.

Sharmini Peries: Ryvka, War On Want has been following the corporate complicity of UK, particularly the Israeli violations of international law for many years. Now what did you find in this report that was a bit unique, or different?

Ryvka Barnard: Right. Well, this report is about UK bank and financial institutions that are investing in companies, selling weapons, and military technology to Israel. In the past, we’ve looked at some of those companies that are directly supplying equipment and technology to Israel used in violence against Palestinians. The banks and financial institutions is in some ways another piece of the puzzle. It’s a nodal point in the chain of complicity that we’re looking at.

Sharmini Peries: The focus of this report being banking, banks invest in order to generate profit usually. Not out of political interest or political agenda. Are there laws in the UK that legislate against this kind of investment?

Ryvka Barnard: Right. Well, one of the things … I mean, one of the pieces of the report is a new set of guidance that was released by the UN high commissioner for human rights just in June of this year, June 2017, clarifying that banks have the same responsibilities as other businesses under the UN guiding principles on business and human rights. That’s a set of criteria that businesses around the world are supposed to adhere to in respect of human rights. It’s also integrated into UK policy, so the UN guiding principles are promoted by the UK as the standard for how businesses should act in regard to human rights. Banks, historically, have said, “Well, we’re not the same as other kinds of businesses,” for the reasons that you mentioned, saying, “We don’t make political decisions. This is just about our clients.” The UN guiding principles, this new set of guidance, said that banks have responsibilities through its business relationships also. That indicates very clearly that banks and financial institutions have a responsibility, a legal responsibility for the actions of their clients as well. If their clients are investing in the arm’s trade, the bank has a responsibility to distance themselves from those clients.

Sharmini Peries: Right. These guidelines that have been issued, which is obviously a good thing, is there anyone monitoring the compliance with such guidelines?

Ryvka Barnard: Well, the new set of guidance in relation to banks just came out a few months ago. There’s some good non-governmental organizations that look specifically at banks. One to mention is BankTrack, which has actually identified HSBC, which is one of the banks that we looked at as a laggard. That’s their term as a bank that has policy in place. HSBC, for example, which has over 830 million pounds invested in companies that are selling weapons to Israel. HSBC says, “Well, we have a defense policy and we can’t be responsible for what our clients do.” We’re saying, and other NGO’s have been saying, “Actually, banks have responsibility not only to have policy towards human rights, but to do monitoring and checks.” That’s what we’re asking HSBC to do, to look at its relationships with these arm’s companies and to divest from them immediately, because we know that arm’s companies like BAE Systems are supplying weapons that are used by Israel in attacks on Palestinians that violate international law.

Sharmini Peries: Right. One interesting fact about HSBC is that it has about 3.6 million pounds invested in Israeli arm’s company, Elbit Systems. You look into this example. Now, this is not a hell of a lot of money when it comes to the arm’s industry. Why is this a unique example for us to look at?

Ryvka Barnard: Well, for us here in the UK especially, Elbit Systems is, first of all, it’s one of Israel’s largest arm’s companies. It’s most known for producing, manufacturing drones, which are not only used by the Israeli military, but also used by militaries around the world. Elbit Systems has four factories in the UK. It co-owns four factories in the UK making drone parts, which are then sent to Israel and were used, for example, in Israel’s 2014 attacks on the Gaza Strip. Elbit Systems is one of the companies that HSBC is invested in. That’s a clear violation of the UN guiding principles and HSBC should be held to account for that. That’s why we’re doing this research, and why we’ve embarked on a campaign telling HSBC that it needs to divest from companies selling weapons to Israel or Israeli arm’s companies themselves.

Sharmini Peries: Now Ryvka, British arm’s companies like BAE Systems, as well as, US arm’s companies Boeing and Raytheon, are some examples listed among the companies which British banks invest in, which are complicit in Israeli violence against Palestinian civilians. These are international companies, which are also selling arms in other regions of the world, such as Saudi Arabia, which is fighting a proxy war in Yemen at the moment. Are there reports coming out of War On Want that focuses on these other such conflicts with these kinds of roles being played by international arm’s manufacturers, or is Israel, Palestine a particular example that you wanted to highlight?

Ryvka Barnard: Well, I think the … It’s not surprising at all that those companies, for example, BAE Systems are also, as you mentioned, completely complicit in war crimes in other parts of the world also, particularly in relation to Saudi Arabia and its war on Yemeni people. For us, we were looking at the chain of complicity in Israeli’s violation. We can look at the arm’s companies, we can look at the violations themselves, then we think it’s important also to look at the banks. Part of that is inspired by our work as a part of the boycott divestment and sanctions movement, which has called on people around the world to look at examples of complicity in our own communities and that’s what we’re doing, but certainly we support campaigns and research looking into these arm’s companies complicity in other places too. In fact, one of our closest allies here of the campaign against arm’s trade has been doing a lot of work on BAE Systems and UK companies arming Saudi Arabia.

Sharmini Peries: All right. Ryvka, thank you so much for joining us today. Looks like a very interesting report. We’ll put a link to it below this interview for those who might be more interested in reading the full report. Thank you so much.

Ryvka Barnard: Thank you very much.

Sharmini Peries: Thank you for joining us here on The Real News Network.