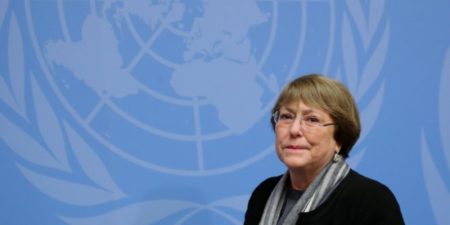 The National Bureau for Defending Land and Resisting Settlements has described UN High Commissioner for Human Rights Michelle Bachelet’s abstention, from disseminating the names of all companies working in illegal settlements, as a clear political, legal and moral violation of human rights, and a contradiction of her duties — especially concerning resolution 31/36 of 2016 and the commitment made by Bachelet, in March of 2019, to the Human Rights Council.

The National Bureau confirmed that Bachelet behaves with a double standard, bowing to American and Israeli pressures, as well as that of some EU countries, on herself and on the Human Rights Council, where she is required to carry out her mission neutrally, in order to protect the rights of Palestinian citizens in the territories occupied since June  of 1967, and also to ensure respect for the law from all governmental and non-governmental bodies concerned with human rights. She is also required to ensure the provision of tools and standards to promote the implementation of the law and international standards, especially as Israel steps up, with the support of the US administration, the construction of illegal settlements in the occupied West Bank.

In Jerusalem, six months on from the opening of the Rami Levi Trade Center, the third stage of the so called Attirot Industrial Zone, in Qalandia, was announced, with an investment of NIS 45 million, funded by the Israeli Ministry of Economy and the Land Authority, in cooperation with the occupation municipality in Jerusalem. The third phase will be completed on an area of 50 dunams, with 11 factories scheduled to be built within the next 3 years, and the construction of 93 new housing units by the end of 2020, in the settlement of “Ramat Shlomo” that was built on Sha’fat lands. 1,500 housing units have been submitted to the Organizing Committees for approval, and this is just the beginning of future projects for the settlement.

PNN further reports that, on the sidelines of the UN General Assembly in New York, the International Socialist Organization condemned the policies of the Israeli occupation in Palestine, and statements made by Israeli Prime Minister Benjamin Netanyahu, for annexing the Jordan Valley and the demolition of houses. The group reiterated its support for the establishment of an independent Palestinian state based on the June 1967 borders, with East Jerusalem as its capital, and for the right of refugees to return.