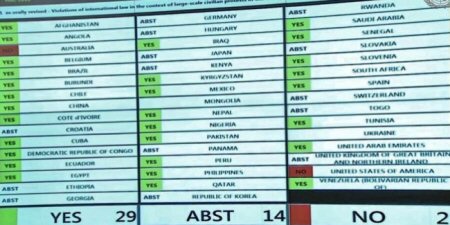 The UN human rights body, on Friday, called for an international inquiry into the state of human rights in East Jerusalem, the West Bank and Gaza, calling out Israel for its killings of protesters in the Strip.

The special session of the Human Rights Council was convened after the bloodiest day for Palestinians in years, last Monday, when over 60 were killed by Israeli gunfire during demonstrations that Israel said included attempts to breach its frontier fence.

The council voted 29-2 with 14 abstentions to back a resolution that also condemned “the disproportionate and indiscriminate use of force by the Israeli occupying forces against Palestinian civilians.” The “independent, international commission of inquiry” mandated by the council will be asked to produce a final report next March.

“Nobody has been made safer by the horrific events of the past week,” UN human rights chief Zeid Ra’ad al-Hussein told the Council, according to the PNN.

He said that Israeli forces had killed 106 Palestinians, including 15 children, since March 30. More than 12,000 were injured, at least 3,500 by live ammunition. Israel is an occupying power under international law, obliged to protect the people of Gaza and ensure their welfare, he said.

Palestine’s envoy to the United Nations Human Rights Council, Ibrahim Khreisheh, called upon the international community to dispatch a fact finding committee in Palestine to investigate the recent Israeli massacre in the Gaza Strip.

Khreisheh’s statement came during an extraordinary session of the UN Human Rights Council, in Geneva, to look into the recent Israeli massacre of more than 60 Palestinians during the recent Great March of Return protests along Gaza’s eastern border.

Meanwhile, Khreisheh said the US Ambassador to the United Nations recently foiled a UN Security Council bid for creating an investigation mechanism into the continuing series of Israeli crimes.