Gideon Levy: No Opposition in Israel as Netanyahu Massacres Gazans 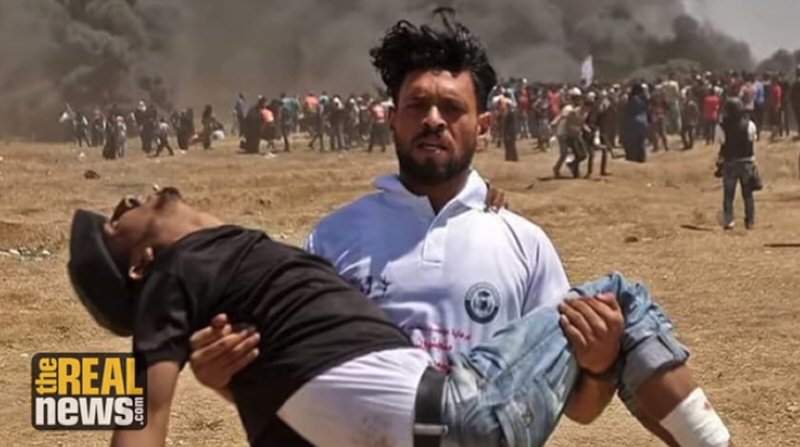 Today I’m joined by the award-winning journalist Gideon Levy. Gideon is a columnist for the major Israeli newspaper Haaretz, and a member of its editorial board. We’re going to be discussing the protests that have been going on in Gaza for the past six weeks, the so-called “Great March of Return,” which have been very brutally repressed violently by the Israeli military. On Monday, May 14, at least 60 Palestinians were killed, and more than 2200 were injured in a brutal crackdown. That is in addition to the dozens more killed over the past six weeks and the thousands who have been injured.

So we’re joined by Gideon Levy to discuss this. Thanks for joining us, Gideon.

BEN NORTON: So can we talk about the response inside Israel? Several years ago we did see some protests against Netanyahu, mostly because of his economic policies. But it seems that today there is really no domestic opposition. And actually, recent polls show that Likud’s popularity, that is the ruling right wing party of Netanyahu, has actually been increasing. And more people support Likud than they did a few years ago. Why is Netanyahu’s popularity increasing when the military is brutally repressing Gazans?

GIDEON LEVY: Netanyahu is doing so well because he succeeded to convince most of the Israelis that there is no alternative for Netanyahu and there is no alternative for his policies. I would like to correct you. Israel is not only supporting Netanyahu. Israel in the last 24 hours is celebrating. It is celebrating the movement of the embassy to Jerusalem. It is celebrating the victory in the Eurovision contest. And the victims of Gaza hardly touch anybody in Israel. Hardly touch anybody.

I don’t remember such a case in which people, 60 people by now, are being killed by Israeli soldiers, and Israel is so indifferent like it is this time, even in times of war. This is not war. So by and large the whole picture is very, very depressing.

BEN NORTON: Yes. And then what has happened to, there was some semblance of a labor movement that criticized Netanyahu to a degree, but in the response to, as you mentioned, the U.S. opening of the embassy in Jerusalem and the crackdown on the protests, it seems that Netanyahu has been able to silence that little opposition that there was. Do you think that he’s using the protests in Gaza as a kind of nationalist point to bring together Israelis from the few political tendencies that exist? Or why do you think that there is so little left-wing opposition to these policies?

GIDEON LEVY: I don’t think he should bother to do this. And he doesn’t bother to do this, because there is no opposition in Israel. And this is not from yesterday, not from the day before this, this is quite a long time ago. When it comes to the real issues, there is no opposition. They all speak the same language, they all direct the same policies. Labor, Yesh Atid, and Likud, they differ a few times in their rhetorics, but not in their substance. They all mean to continue the occupation. They are united around the so-called morality of the IDF. They are always united when it comes to Israeli aggression. They never criticize Israeli aggression. And you know, Netanyahu can just laugh all the way to the bank.

BEN NORTON: And then do you think that Netanyahu is exploiting some of these, these events, the protests in Gaza, which he’s brutally repressing, the opening of the embassy, to distract from the corruption scandal? Because it seems like the media attention has largely been diverted away from the focus on his corruption.

GIDEON LEVY: I don’t think, first of all, we don’t have an answer because you can never prove those things. But he doesn’t need Gaza for sure. He doesn’t need Gaza. And you know, the embassy he got is a free present from the American president. He shouldn’t do much about, he didn’t do much about it. He got it. We didn’t mention also the cancellation of the agreement with Iran, which is another gift that he goes for free, without really giving anything in return. So when you have such a president in the White House who spoils you so much, you don’t need Gaza to reinforce your political power.

BEN NORTON: Yes. And then also, your newspaper Haaretz reported on Tuesday, May 15, that Israel actually threatened to assassinate senior Hamas leaders, that is, leaders of the Hamas party which rules Gaza, if they continued the protests. Can you respond to this report?

GIDEON LEVY: Yeah. We don’t know if it’s just rhetoric. So it was a way to push them to the corner even more. But this is always a secret weapon that Israel had used in the past, as you know. Most of the old generation of Hamas leaders are not with us anymore, because Israel assassinated them, from [name inaudible] to others, and Israel will not hesitate for a moment to do so now, especially when he gets this automatic and blind support to anything he does from the White House.

BEN NORTON: Yes. And then what do you think, clearly we’ve seen reports of journalists, children, unarmed civilians en masse who are gunned down, shot, killed, and disabled by the Israeli military. The Israeli government’s response is they claim that these are all Hamas supporters, Hamas militants, who are providing cover for Hamas. What is your response?

GIDEON LEVY: This is so ridiculous. I mean let’s go state by state. The fact that they are Hamas supporters, let’s say they are Hamas supporters. Does it mean that Israel has the right to execute them? Especially when they are not armed, when they don’t endanger anyone? And secondly, if they are Hamas activists, that’s illegitimate to kill any soldier in this case, any Israeli soldier? Because by this Israeli says that anybody in uniform or anybody in there with weapons, it’s totally legitimate to assassinate him. So it goes in both direction. But obviously Israel knows the truth, and the truth is that most of them are non-violent and unarmed protesters who have nothing to lose, who go to the fence not because Hamas brought them there. They go to the fence because they starve, because they have no perspective for the future, because they have nothing in their life, and nothing to lose in their lives. And this for Israel is too hard to go up with.

BEN NORTON: And then finally, I want to take a step back a bit and talk about the geopolitics of the situation in Israel. We’ve seen Israel repeatedly launch airstrikes inside Syria. And what’s interesting is the United States has staunchly supported Israel, which is its key ally in the region. That’s not surprising. But last week Netanyahu traveled to Moscow and met with Russian President Vladimir Putin. And Israel has continued launching airstrikes against Iranian, Syrian, and Hezbollah forces inside Syria which are allied with Russia. So what do you think Russia’s response is to this? Because it seems that Russia has not spoken out vociferously, if at all, against the massacres of protesters inside Gaza, and Russia has said little about the Israeli airstrikes inside Syria.

BEN NORTON: Yeah. And then to conclude here, what do you think people around the world can or should do, whether it’s governments, or people who are in organizations, or individuals, when they see the response? There is so little opposition inside Israel as it’s gunning down unarmed civilian protesters in Gaza. What can and should the world do?

GIDEON LEVY: One should ask himself is he ready to do, to support all these. He’s shooting nonviolent demonstrators, violating the international law or not, is the siege on Gaza, of 11 years now, something humane, something moral, something legal? And if not, what are you going to do about it?

BEN NORTON: We’ll have to end our discussion there. I was joined by the award-winning journalist Gideon Levy. Gideon is a columnist for the major Israeli newspaper Haaretz. Thanks a lot for joining us.