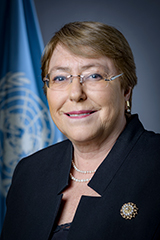 GENEVA (26 October 2021) UN Office of the High Commissioner for Human Rights – Israel’s decision to designate six Palestinian civil society organizations as “terrorist organizations” is an attack on human rights defenders, on freedoms of association, opinion and expression and on the right to public participation, and should be immediately revoked, UN High Commissioner for Human Rights Michelle Bachelet said on Tuesday.

The organizations concerned* are some of the most reputable human rights and humanitarian groups in the occupied Palestinian territory and for decades have worked closely with the UN.

The designation decisions under the Israeli Counter-Terrorism Law of 2016 are based on extremely vague or unsubstantiated reasons, including entirely peaceful and legitimate human rights activities, such as providing legal aid to Palestinians in detention, organizing activities for women in the West Bank and “promoting steps against Israel in the international arena.”

The High Commissioner reiterated that counter-terrorism legislation must not be applied to legitimate human rights and humanitarian work. The banning of organizations must not be used to suppress or deny the right to freedom of association, or to quash political dissent, silence unpopular views or limit the peaceful activities of civil society. The national authorities responsible for proscribing organizations must comply fully with the State’s international human rights obligations, including by respecting the principles of legal certainty, proportionality, equality and non-discrimination.

“The organizations, who include some of the key partners of the UN Human Rights Office, face far-reaching consequences as a result of this arbitrary decision, as do the people who fund them and work with them,” Bachelet noted. “And the crucial work they perform for thousands of Palestinians risks being halted or severely restricted.”

The published designation decisions by the Israeli Minister of Defence state that the organizations are, or have become, the “arm” of the Popular Front for the Liberation of Palestine (PFLP) and that they obtained financial resources, which in practice reached the “[PFLP] terror activity” or supported their activities. There is no evidence presented to support these accusations, no information on the type of alleged “PFLP terror activity,” nor has any public process been conducted to establish the allegations.

Israel’s Counter-Terrorism Law of 2016 sets out prison terms of between five and 25 years for staff and members of the designated organizations, provides for confiscation of assets, and closure of the organization. It also criminalizes the provision of support – including financial aid as well as publishing words of “praise, support or sympathy” – with between three to five years in prison.

“The designation decisions contravene the right to freedom of association of the individuals affected and more broadly have a chilling effect on human rights defenders and civic space. Any restrictions on the right to freedom of association must meet a strict test of necessity and proportionality,” the High Commissioner said. “In addition, these latest developments highlight how problematic Israel’s counter-terrorism law is, including its overly broad definition of terrorism, problems of due process and the manner in which it allows evidence to be kept secret.”

The designations against the six organizations on 19 October are the latest in a long-running series of actions to undermine and restrict human rights defenders and civil society organizations working for the human rights of Palestinians, including using military regulations to declare groups unlawful.

“Israel must ensure that human rights defenders are not detained, charged and convicted in relation to their legitimate work to protect and promote human rights. I call on the Israeli authorities to revoke their designations against Palestinian human rights and humanitarian organisations as terrorist organizations, as well as their declarations against those they deem to be ‘unlawful’,” Bachelet said.

Also available in Arabic and Hebrew.