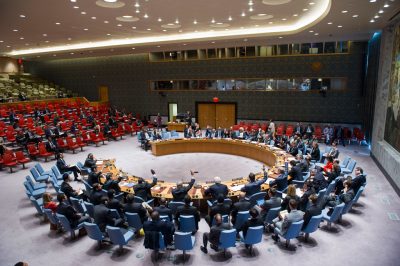 Fourteen of the fifteen nations in the United Nations Security Council voted Monday reaffirming the status of the city of Jerusalem as unresolved, and challenging the U.S. administration’s decision to recognize Jerusalem as the capital of Israel. The U.S., which has veto power in the Council, vetoed the resolution.

Following the U.S. veto of the resolution, Israeli Prime Minister Binyamin Netanyahu tweeted, “Thank you, Ambassador Haley. On Hanukkah, you spoke like a Maccabi. You lit a candle of truth. You dispel the darkness. One defeated the many. Truth defeated lies. Thank you, President Trump.”

The veto on Monday’s vote marked the first time that the U.S. has used its veto power since Donald Trump took power in the country.

The U.S. Ambassador to the United Nations said following the vote, “We [veto this resolution] with no joy, but we do it with no reluctance. The fact that this veto is being done in defense of American sovereignty and in defense of America’s role in the Middle East peace process is not a source of embarrassment for us; it should be an embarrassment to the remainder of the Security Council.”

But critics have pointed out that the U.S. administration’s move claiming Jerusalem as the capital of Israel is outside of the U.S. government’s jurisdiction, and is undermining the sovereignty and self-determination of the Palestinian people by denying their existence and right to the holy city.

The UN Security Council resolution was introduced by the Egyptian delegation to the Council, and was widely supported by nations around the world.

The UN Mideast Envoy Nickolay Mladenov spoke in favor of the resolution, citing Israel’s decade-old ‘E1 Plan’ to encircle the city of Jerusalem with colonial settlements, thereby cutting off the West Bank from the city and expanding the Israeli state in direct violation of international law and signed agreements.

According to Mladenov, since Trump made his declaration on December 6th, “some 1,200 units in the occupied West Bank were approved for construction, approximately 460 of them in the settlement of Ma’ale Adumim, in addition to the new settlement of Amihai, a new neighborhood in Kochav Yaakov, and a new site near Alon Shvut. The construction of infrastructure in Givat Hamatos…would solidify the ring of settlements isolating East Jerusalem from the southern West Bank.” Also in the past 12 days since Trump’s statement, “Israeli authorities demolished or seized 61 structures, 110 people, including 61 children were displaced and the livelihoods of over 1,000 people were affected.”

He pointed out that Israel has engaged in massive settlement growth on stolen Palestinian land, violence against civilian populations, and incitement against Palestinians, and noted that, “in 2017, there were 109 shooting, stabbing, ramming and bombing attacks conducted [by Palestinians against Israelis], compared to 223 in 2016. In 2017, 72 Palestinians and 15 Israelis were killed, while in 2016 there were 109 and 13, respectively.

The Israeli ambassador to the United Nations criticized the Security Council resolution, saying, “members of the Security Council can vote another hundred times to criticize our presence in Jerusalem, but history won’t change. While the Jewish people celebrate the holiday of Hanukkah that symbolizes the eternal connection to Jerusalem, there are people who think that they can rewrite history. It’s time for all countries to recognize that Jerusalem always was and always will be the capital of the Jewish people and the capital of Israel.”

But the statement by the Israeli ambassador did not acknowledge that the Security Council was not criticizing Jewish presence in the city of Jerusalem, but was instead challenging a unilateral action by the state of Israel, backed by the United States, to take over territory through the use of military force and expand Israel’s (never declared) borders while pushing out, killing and denying the presence of the indigenous Palestinian population.

As Juan Cole pointed out in 2010 in his synopsis of the history of the city of Jerusalem, “The Assyrians conquered Jerusalem in 722. The Babylonians took it in 597 and ruled it until they were themselves conquered in 539 BCE by the Achaemenids of ancient Iran, who ruled Jerusalem until Alexander the Great took the Levant in the 330s BCE. Alexander’s descendants, the Ptolemies ruled Jerusalem until 198 when Alexander’s other descendants, the Seleucids, took the city. With the Maccabean Revolt in 168 BCE, the Jewish Hasmonean kingdom did rule Jerusalem until 37 BCE, though Antigonus II Mattathias, the last Hasmonean, only took over Jerusalem with the help of the Parthian dynasty in 40 BCE. Herod ruled 37 BCE until the Romans conquered what they called Palestine in 6 CE (CE= ‘Common Era’ or what Christians call AD). The Romans and then the Eastern Roman Empire of Byzantium ruled Jerusalem from 6 CE until 614 CE when the Iranian Sasanian Empire Conquered it, ruling until 629 CE when the Byzantines took it back.

As the late Edward Said noted in 2011, “The Zionist claim to the land is one claim among many others. Certainly the Arabs have a much greater claim because they have a longer history of inhabitance, of actual residence in Palestine than the Jews did…..If you look at history, you’ll see that the actual Israelite inhabitance in Palestine, in the Old Testament, amounted to about 200 to 250 years. But there were Mallebites, there were Jebusites, there were Canaanites, there were Philistines, there were many other people in Palestine at the time and before and after. And to isolate one of the claims and say that’s THE claim, that is the real owner of the land — that’s fundamentalism…Because the only way you can back it up is to say ‘God gave it to us’. Yes, but Christians say that God gave it to them, Muslims say that God gave it to them – it’s not a rational argument. So I think that the people who have a history of residence in Palestine, including the Jews and, of course, the Arabs, have a claim. But I don’t think that any claim, whether it’s given by god or the emperor, nobody has the claim that overrides all the others’ and entitles that person with that so-called claim to drive people out.”