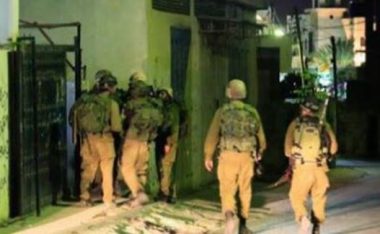 Israeli soldiers abducted, earlier Monday, at least nine Palestinians in several parts of the occupied West Bank, while large groups of soldiers and colonists invaded the yards of the Al-Aqsa Mosque, in occupied Jerusalem, and archeological sites in Kifl Hares, near Salfit, in northwestern West Bank.

The Hebron office of the Palestinian Prisoners Society (PPS), in southern West Bank, said the soldiers invaded and violently searched many homes in the city, Doura nearby town, in addition to the villages of at-Tabaqa and Kharsa, and abducted four Palestinians.

In Hebron city, the soldiers invaded many neighborhoods, before breaking into and ransacking homes, and abducted Mohammad Shahin Ja’bari.

In addition, the soldiers invaded Bethlehem city, and abducted Ibrahim Abdul-Rahman Jibreen, 48, from Wadi Shahin area, in the center of the city, after invading his home.

The soldiers also abducted Mohammad Jawdat Shahrour, from the Eastern Neighborhood of Tulkarem city, in the northern part of the W Bank, and Laith Hussein from Nur Shams refugee camp, east of Tulkarem.

Another Palestinian, identified as Mohammad Mousa Abu Zeid, 40, was abducted by the soldiers at the al-Karama Border Terminal with Jordan, while he was returning from visiting with family members living in Saudi Arabia.

Furthermore, dozens of soldiers and colonists invaded Kifl Hares, north of Salfit, and visited some archeological sites, after the soldiers closed the entire area.

Soldiers and colonists also invaded the courtyards of the Al-Aqsa Mosque, in occupied Jerusalem, after storming it from thee al-Magharba Gate, and conducted provocative tours, after forcing many Palestinians out of the holy site.