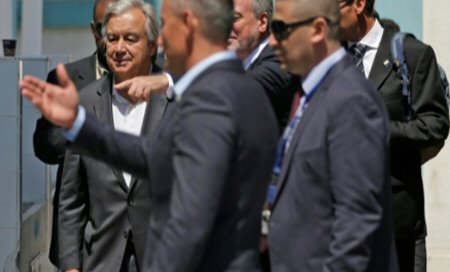 UN Secretary-General Antonio Guterres visited Gaza in August of 2017, but several proposed Security Council visits to the Palestinians territories have been blocked.

Israel has told the UN Security Council that it opposes a planned visit by the top UN body to the Palestinian territories, for a close-up look at the situation, diplomatic sources reported Wednesday.

During a closed-door meeting on Wednesday, the council president briefed members on talks held with Israel and the Palestinians on the proposal for a visit.

It noted, according to Al Ray, that Kuwait and other council members proposed the visit to the occupied territories during a meeting, last week, on Israel’s decision to end the international observer force in the West Bank city of Hebron.

The Security Council asked the council president to meet the Israeli and Palestinian ambassadors, to discuss a visit, after the United States blocked an Arab-backed Security Council statement put forward by Indonesia and Kuwait expressing regret at Israel’s suspension of an international observer mission in the West Bank city of Hebron.

A council visit requires support from all 15 council members and approval by the countries concerned. Several other members confirmed Danon’s rejection.

The Temporary International Presence (TIPH) in Hebron was established in 1994, following Israeli settler Baruch Goldstein’s massacre of 29 worshippers at the Ibrahimi Mosque in the West Bank city, which triggered riots across Palestinian areas.