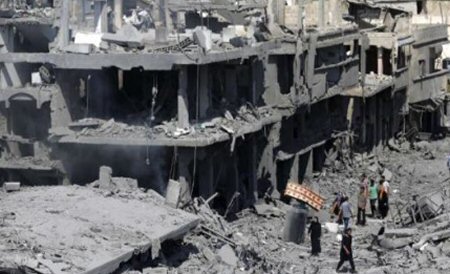 The United Nations has warned that the humanitarian situation in the Gaza Strip is now “catastrophic” due to a decade-long “economic siege” imposed by Israel, on the densely-populated Palestinian coastal enclave.

“The situation in Gaza is becoming less and less livable,” Isabelle Durant, the deputy head of the United Nations development agency (UNCTAD) said on Wednesday, according to Press T/Al Ray.

The UN agency said, in an annual report, that unemployment in the occupied Palestinian territories rose to more than 27 percent overall in 2017, the world’s highest, while around 44 percent in Gaza alone.

It noted that the adverse conditions imposed by the Tel Aviv regime disproportionately affected women and young people, saying that half of Palestinians under the age of 30 are out of work.

The report said that the widespread Israeli restrictions on the movement of people and goods, confiscation of land and natural resources, and the accelerating expansion of settlements were also damaging.

The UNCTAD said that removing restrictions on the besieged territory was particularly important, warning that the strip had been “reduced to a humanitarian case of profound suffering and aid dependency.”

Lifting some of the Israeli restrictions on Palestinian trade and investment could allow the territory’s gross economy to swell by up to 10 percent, the UN agency said.

The UN agency further reported a sharp drop in international support to the Palestinians, “a freeze in the reconstruction of Gaza and unsustainable credit-financed public and private consumption paint a bleak picture for future growth.”

International development assistance to the Palestinians shrunk by more than 10 percent, compared to a year earlier.

The dramatic drop in donor support came before US President Donald Trump’s administration decided to completely halt its funding for the UN Relief and Works Agency for Palestine Refugees (UNRWA), part of a policy to impose maximum pressure on the Palestinians to satisfy the Israeli regime’s interests and Zionist constituencies in the US.

Last month, the Trump administration decided to cancel all US funding to UNRWA, which had previously stood at around $350 million a year.

Washington also scrapped around $200 million in aid for the West Bank and Gaza, and, overthe weekend, said it would cut $25 million more, in direct aid, to six hospitals that primarily serve Palestinians in Jerusalem al-Quds.

Mahmoud Elkhafif, who coordinates UNCTAD’s Assistance to the Palestinian People Unit, said that US cuts would certainly result in “more misery” in Gaza.

Israel has been enforcing an all-out blockade of the territory since 2007.

The UN has warned that the blockade on Gaza would render it uninhabitable by 2020, but, on Wednesday, the UN agency said conditions “are worse” than when they made that prediction.

The UNCTAD said that a decade-long siege and three Israeli-imposed wars have “eviscerated” Gaza’s productive capacity.

The Israeli regime denies about 1.8 million people in Gaza their basic rights, such as freedom of movement, jobs with proper wages as well as adequate healthcare and education.

Israel has also launched several wars on the Palestinian sliver, the last of which began in early July of 2014 and ended in late August, the same year. The aggression killed nearly 2,200 Palestinians and injured over 11,100 others.