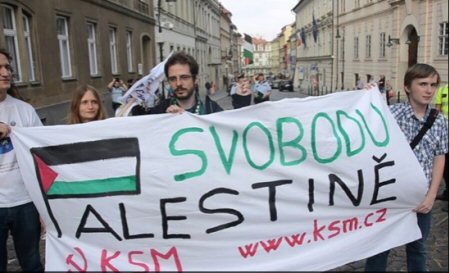 BETHLEHEM (Ma’an) — Israeli news media published, on Thursday, a reports about the Czech Republic’s intention to transfer its embassy from Tel Aviv to Jerusalem, however, it contradicts the Czech Republic’s position in the European Union and its commitment to policies regarding the Israeli-Palestinian conflict.

Czech-language news outlets, such as Seznam, Zpravy Aktualne and iDnes, explained the highly publicized issue and offered details concerning the alleged Czech embassy’s opening in Jerusalem.
Sources confirmed that, already in May 2018, discussions took place regarding the opening of “Czech House” in Jerusalem, which was announced to include three institutions, Czech Centre, Czech Tourism and Czech Trade.

Sources stressed that Czech House in Jerusalem is not an alternative for the Czech embassy in Tel Aviv, neither is it in violation of any international laws or resolutions.

According to the sources mentioned above, the pro-Israeli Czech President, Milos Zeman, was promoting the idea of transferring the Czech embassy from Tel Aviv to Jerusalem since April, even before the United States embassy had officially moved.
‘
Zeman called upon European countries and critics of the embassy move, labeling them as “cowards,” adding that “it might not be polite, but it is sincere.”

Zeman continued by saying he hopes that the opening of the Czech House would be “the first step in the plan to move the Czech embassy to Jerusalem.”

However, sources said that the situation will remain as it is, with the Czech Honorary Consulate in Jerusalem and the embassy in Tel Aviv.
The Czech Prime Minister, Andrej Babis, opposed the embassy move endorsed by Zeman and said, in a statement: “We are a small country, but the big countries should be the ones to strive for peace. We have to fight situations, where a conflict is expected to happen and where possible protests or attacks could take place.”

He mentioned the US embassy move and that “it is not a good idea, following evident negative reactions. There is no need to create bigger conflicts in the region.”

Babis also said that the position of the United Nations and the European Union, on the Israeli-Palestinian conflict, is clear, with regard to Jerusalem’s status as capital of both Israel and Palestine, in the future.

Although a specific date for the opening was not set, Zeman’s spokesperson, Jiri Ovcacek, said “The Czech House in Jerusalem will be ceremonially opened by the president during his visit to Israel in November.”

It is noteworthy that this will be Zeman’s first visit to Israel.
Despite the alleged intention of the Czech Republic to move its embassy to Jerusalem, it does not currently plan to follow in United States’ and Guatemala’s footsteps.

Israel emphasized the issue of the transfer of the Czech embassy following Paraguay’s decision to relocate its embassy back to Tel Aviv after its opening in Jerusalem in May, which was a massive step that upset Israel.

Additionally, the Palestinian ambassador to the European Union (EU), Abdul Rahim al-Farra, denied alleged reports that the Czech Republic intends to move its embassy in Israel from Tel Aviv to Jerusalem.

During an interview with the Voice of Palestine radio, al-Farra stressed that, until now, there was no official confirmation regarding this matter, pointing out that there were assurances from the Czech Foreign Ministry that its embassy will not be transferred to Jerusalem.

Al-Farra pointed out that, “the EU, specifically its Foreign Policy Chief, Federica Mogherini, called on all EU member states not to move their embassy to Jerusalem because such an act would affect the peace process and the two-state solution.”