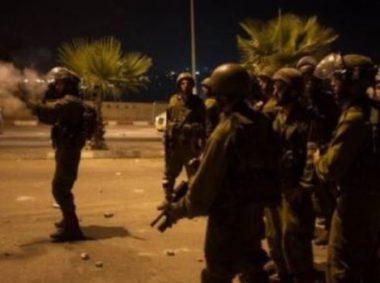 Undercover Israeli soldiers infiltrated, on Friday evening, into Jamal Abdul-Nasser Mosque, in the of al-Biereh city, in Ramallah and al-Biereh Governorate in central West Bank, and kidnapped a Palestinian man, before regular army units invaded the city, and injured at least five Palestinians.

Media sources said the undercover soldiers assaulted and kidnapped Hamza Ghanem, 30, who conducts maintenance work in the mosque, before placing him in a car and speeding away.

They added that Israeli soldiers secured the retreat of the undercover officers by firing live rounds, rubber-coated steel bullets and gas bombs, at Palestinian protesters.

Medical sources said the soldiers shot one Palestinian with live fire, two with rubber-coated steel bullets and at least two who suffered the effects of teargas inhalation.

Sheikh Yousef Ed’eis, the head of the Waqf and Religious Affairs Department, strongly denounced the invasion into the mosque, and added that the undercover soldiers also had dogs with them in the holy site.

“This is a cowardice and a criminal assault against a holy site,” he stated, “It is just a small part of ongoing Israeli violations against Islamic and Christian holy sites in occupied Palestine – these violations are encouraged and incited by Israel’s fanatic right-wing political leaders.”

Ed’eis added that the soldiers smashed doors in the mosque while searching it, and demanded the International Community to intervene and end these serious Israeli violations.