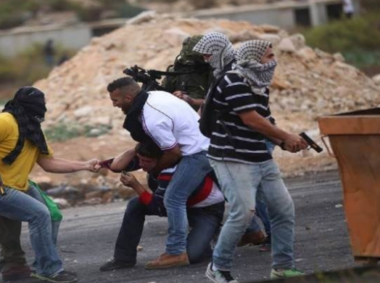 Montaser Sammour, the head of the Jenin office of the Palestinian Prisoners’ Society (PPS) has reported that the undercover soldiers ambushed and kidnapped the five residents near an area close to the roadblock and took them to a nearby military base.

He added that the Palestinians have been identified as former political prisoner Mohammad Ammouri al-Bashbash, in addition to Mohammad Ar’arawi, Ahmad Shayes, Ahmad Shwaweesh, Baha’ Lahlouh, and Mohammad Jabarin.

In related news, the soldiers abducted Mohammad Wael Ghazzawi, from Jenin, while working in occupied Jerusalem.

On Monday at dawn, the soldiers abducted a young Palestinian man in Bethlehem, south of occupied Jerusalem, and one in the Zababda town, southeast of Jenin.

Also at dawn, a large contingent of Israeli soldiers invaded various parts of the West Bank before dawn on Monday and abducted 10 Palestinians from their homes.