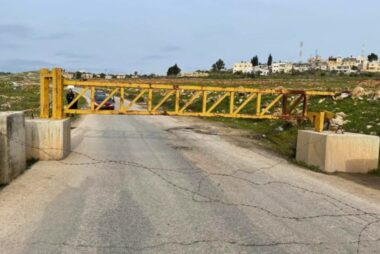 Local sources said the undercover soldiers ambushed a car, forced the two Palestinians out, and kidnapped them.

They added that the two Palestinians, both former political prisoners, identified as Mos’ab Salah Samhan and Mohammad Aqab Radi, from al-Gharbiya village, were taken to an unknown destination.

The two Palestinians were on their way to work in the nearby village of Shuqba, northwest of Ramallah.

In related news, the soldiers invaded Biddu town, northwest of occupied Jerusalem, and conducted massive searches in the Jabal Sheikh area, leading to protests, before the army fired gas bombs and con concussion grenades, causing many Palestinians to suffer the effects of tear gas inhalation.

Also, the soldiers fired many gas bombs at Palestinians near the Beit Furik military roadblock east of the northern West Bank city of Nablus and barred the residents, including students, workers, and employees, from crossing.

Nablus has remained under strict Israeli siege for the last two weeks after the army closed all roadblocks and entire isolated communities.