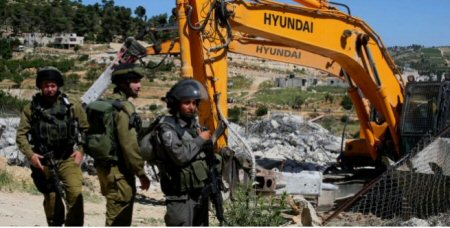 In the past two weeks alone, Israeli authorities demolished or seized 12 Palestinian-owned structures in Area C of the occupied West Bank and in East Jerusalem, the United Nations Office for the Coordination of Humanitarian Affairs (UNOCHA) said yesterday.

In its Protection of Civilians Report, covering the period of 17 – 30 September, 2019, the UNOCHA said that one of the structures demolished was a protest tent, which was demolished on the grounds of a lack of Israeli-issued permits, displacing seven people.

The tent was erected in the Al Muntar area, near Al ‘Eizariya town, in Jerusalem, in response to the installation of a new settlement outpost. Palestinians reported that the outpost is erected on their land, affecting access for around 300 people.

UNOCHA said, according to WAFA, that all displacement incidents were recorded in East Jerusalem, where three residences were demolished in the neighborhoods of Beit Hanina, Silwan and At Tur. The remaining properties demolished included four livelihood structures, two houses under construction, a water cistern and a concrete fence in five Area C localities.

“A total of 439 structures have been demolished or seized so far in 2019 in the West Bank, an over 40 per cent increase compared with the equivalent period of 2018,” the report added.

Meanwhile during the same period, the report said, Israeli settlers carried out four attacks that resulted in the injury of three Palestinians and damage to olive trees; another 12 Palestinians were injured by Israeli forces, in settler-related incidents.

“In two incidents, settlers stoned and injured five Palestinians, including a 14-year-old child, in the Israeli-controlled area of Hebron city (H2) and in Beitin village (Ramallah). In another two incidents in Nablus, residents reported that settlers stole their olives and vandalized 47 trees in As Sawiya village and sprayed slogans on houses and vandalized one vehicle, in Duma village,” UNOCHA continued.

A total of 12 Palestinians were injured by Israeli forces during clashes with Palestinians that erupted while Israeli settlers were visiting religious sites in the cities of Nablus and Halhul (Hebron). In addition, settlers verbally assaulted and intimated international volunteers accompanying Palestinian herders near the Havat Ma’on settlement outpost (Hebron).

Citing safety reasons during the two weeks, Israeli authorities installed a permanent barrier along a key road in southern Hebron, further impeding access of vulnerable herding communities. The barrier affects the movement some 800 Palestinians in four communities at risk of forcible transfer, due to their location in an area (Massafer Yatta) designated, by Israel, as a firing zone for military training, alongside other restrictive practices.

Israeli forces carried out a total of 191 search and arrest operations across the West Bank and detained 167 Palestinians. The majority of the operations were in the Ramallah (58), Jerusalem (45), and Hebron (23) governorates.