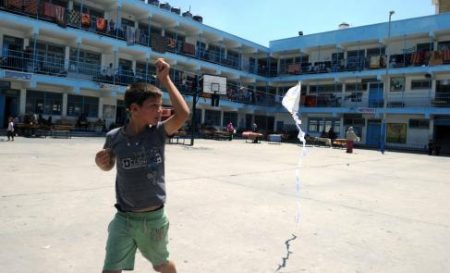 nsnbc : The United Nations Relief and Works Agency in the Gaza Strip, Palestine, condemned in the strongest possible terms, the construction of tunnels underneath UNRWA operated schools as a violation of the agency’s neutrality.

In a statement released by UNRWA spokesman Christopher Gunness, the agency stated that on June 1, UNRWA discovered part of a tunnel that passes under two adjacent Agency schools in Maghazi camp in the Gaza Strip, namely the Maghazi Elementary Boys A&B School and the Maghazi Preparatory Boys School.  The schools are located on the same premises.

The discovery was reportedly made during the summer vacation, at a time when the schools are empty, and in the course of work related to the construction of an extension of one of the buildings. The agency further stated that:

“Following a thorough inspection of the site, UNRWA can confirm that the tunnel has no entry or exit points on the premises nor is it connected to the schools or other buildings in any way.

UNRWA condemns the existence of such tunnels in the strongest possible terms. It is unacceptable that students and staff are placed at risk in such a way.  The construction and presence of tunnels under UN premises are incompatible with the respect of privileges and immunities owed to the United Nations under applicable international law, which provides that UN premises shall be inviolable. The sanctity and neutrality of UN premises must be preserved at all times.

UNRWA has robustly intervened and protested to Hamas in Gaza. It has also informed them that the Agency intends to seal the tunnel under its premises, as an immediate priority. We will not allow any students or staff into the building until the issue is resolved.

The Agency again demands that all parties respect the neutrality and inviolability of United Nations premises at all times.  Furthermore we demand they desist from any activities or conduct that put beneficiaries and staff at risk and undermine the ability of UN staff to provide assistance to Palestine refugees in safety and security.”

The discovery of the tunnels puts into perspective incidents like the Israeli shelling of one of its schools that was sheltering hundreds of displaced Palestinians in the Gaza Strip in July 2014, after Hamas fighters were observed launching rockets from the vicinity of the school. Moreover, UNRWA discovered rockets made by Hamas’ armed wing – the Qassam Brigades – between to other UNWRA schools that at the time accommodated 1,500 internally displaced persons. UNRWA, in 2014, condemned Israel’s shelling of the school as unequivocally as it condemns the construction of tunnels under school premises.