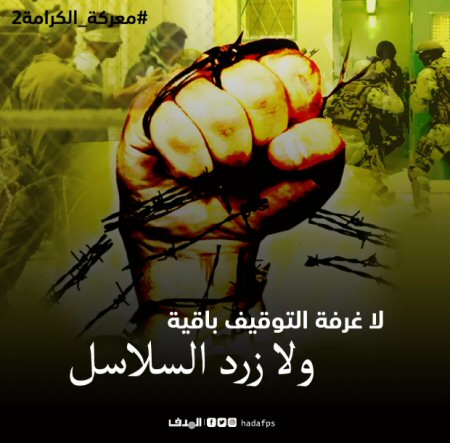 The office pointed out, on Monday morning, that the detainees are continuing their strike in opposition to the installation of the cancer-causing jamming devices in their cells for the 14th day in a row.

It said that the prisoners took escalating steps as the IPS keeps its position of rejection to meet with their demands, which include removing the devices, installing public phones inside prisons, as well as ending the punitive measures imposed against the hunger-striking detainees since last Tuesday.

The office added that Palestinian detainees, specifically those held in Raymond prison, launched a mass open-ended hunger strike on September 9, after Israeli Prison Service (IPS) had denied the agreement made with the detainees last April, which included these demands.

The office further noted, according to Al Ray,, that after denying the agreement, the detainees held several negotiating sessions with IPS, to meet their demands, but they were all of no avail.