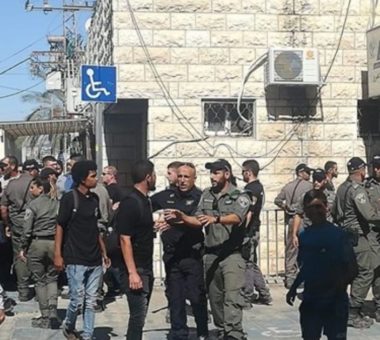 Israeli police officers detained, Wednesday, at least ten Palestinians in Shefa-‘Amr city, about 13 kilometers from Haifa, during protests that erupted after the Israeli Authorities demolished three homes in 24 hours, allegedly for being built without permits.

Dozens of police officers surrounded the city and prevented the residents from leaving their homes, before invading it and demolishing the properties, leading to protests.

After demolishing the homes, the police arrested five Palestinians, and five others following the ensuing protests, in addition to firing gas bombs and concussion grenades, causing several injuries.

The City Council in Shefa-‘Amr declared a general three-day strike, and called for a procession at 10 in the morning, starting in front of its building, Thursday.

The police also summoned for interrogation Morad Haddad, a member of the Political Bureau of the National Democratic Assembly and a former member of Shefa-’Amr City Council, and abducted him in front of the City Council building.