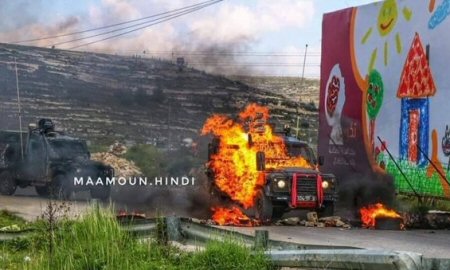 Eight Palestinians were shot and injured as Israeli forces suppressed a peaceful march in solidarity with Palestinians prisoners, in front of Birzeit University, in the central occupied West Bank district of Ramallah, on Wednesday.

Sources confirmed that eight Palestinians were shot and injured with rubber-coated steel bullets, while dozens of others, including a WAFA photojournalist, suffered from tear-gas inhalation.

Palestinian protesters managed to light an Israeli military jeep on fire after throwing a Molotov cocktail towards it, forcing Israeli soldiers to abandon the vehicle.

No injuries were reported among Israeli soldiers.