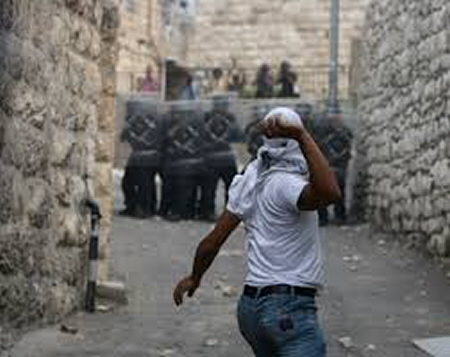 Hundreds of Israeli settlers, on Thursday at dawn, stormed Joseph’s Tomb under heavy guard of Israeli police, in Nablus. One Israeli soldier was injured in violent clashes which erupted between Palestinian youth and the settlers, Israeli media announced.

Eyewitness reported, according to Al Ray, that dozens of Israeli military jeeps stormed, at midnight, the eastern area of Nablus and were deployed around the tomb. A number of Israeli snipers stationed themselves along the top of a high Palestinian-owned building to provide protection for the invading settlers.

Later on, dozens of Israeli buses, accompanied by Israeli jeeps, arrivd on the scene, carrying settlers from Beit Furik, and stormed the city.

The resultant clashes were focused around the southern entrance of Balata refugee camp.

Israeli news site Ynet reported that one Israeli soldier was injured in the clashes.