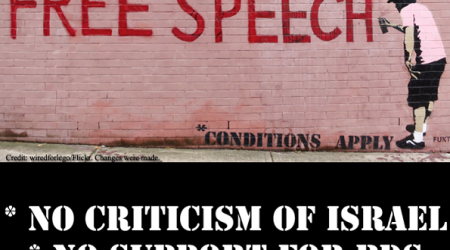 On Tuesday, the American Civil Liberties Union (ACLU) announced that it maintains its opposition to the revisions made in the “Anti-BDS” that was presented by the US Congress over a year ago.

In addition to their opposition, Ben Wizner, director of the ACLU Speech, Privacy, and Technology Project stated that “the revised bill continues to penalize participants in political boycotts in violation of the First Amendment.” The ACLU also stated that should the bill pass, they would challenge the bill in the U.S. Supreme Court.

According to the PNN, the United States has a long tradition of boycotting as a form of non-violent protest. As a matter of fact, prior to the Revolutionary War, the American colonists of 1767 began boycotting the tax that the British placed on imported goods, then known as the “Townshend Act.” They boycotted in an attempt to change the policies of the government.

Its impact was felt in loss of revenue, forcing the British to revoke the Townshend Act three years later. Less than ten years later, the American Revolution was won and the US Constitution was carefully crafted with simultaneous objectivity and ambiguity. The First Amendment was written first for a reason. The authors of the US Constitution knew that, in order for freedom to be protected, the right of citizens to speak and act out against injustices was what gave them their freedom from the tyrannical practices of the British government. And, so, it was written:

“Congress shall make no law respecting an establishment of religion, or prohibiting the free exercise thereof; or abridging the freedom of speech, or of the press; or the right of the people peaceably to assemble, and to petition the government for a redress of grievances.” -1st Amendment of the United States Constitution.

It makes it rather hard to understand how S.170 Combating BDS Act of 2017 was introduced in the 115th Congress. In summary it states, “This bill allows a state or local government to adopt and enforce measures to divest its assets from, prohibit investment of its assets in, or restrict contracting with: (1) an entity that engages in a commerce- or investment-related boycott, divestment, or sanctions activity targeting Israel; or (2) an entity that owns or controls, is owned or controlled by, or is under common ownership or control with such an entity.

Such measures are not preempted by federal law. A state or local government that seeks to adopt or enforce such measures shall comply with specified requirements related to notice, timing, and opportunity for comment.

In addition, the bill amends the Investment Company Act of 1940 to prohibit a person from bringing any civil, criminal, or administrative action against a registered investment company based solely upon that company’s divestment from securities issued by a person that engages in a commerce- or investment-related boycott, divestment, or sanctions activity targeting Israel.

Though the actions of the ACLU are certainly a win for BDS and those of us who still believe in democracy and civil rights, it’s hardly the last we will see of this bill.

On the upside, when the bill was challenged by the Olympia Food Company’s 16 board of directors. Though the case has been seen by several lower courts as meritless, the case is still being challenged.

A summary judgement hearing is scheduled for March 9th of this year.