US Embassy to Raise Height of its Embassy Wall in Jerusalem 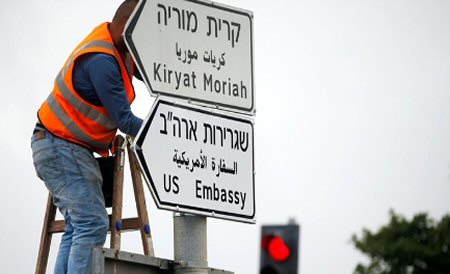 The US embassy in Jerusalem began constructing a wall surrounding the building of its new quarter, with a height of 6 meters, according to Al Ray.

Israelis living in the same neighborhood reportedly complained that the height of the wall covers the scenery, depriving them from enjoying the sight.

It was noted that Israelis living near the embassy sent a letter to Israeli Prime Minister Benjamin Netanyahu, as well as to US Ambassador David Friedman, demanding them to retreat from this step.

Finance Minister Moshe Kahlon has already signed an order to raise the wall, citing security reasons, as part of the implementation of pre-approved emergency instructions, including the construction of a private street.