US Supporting Settlement Expansion as Israeli Elections Draw Near 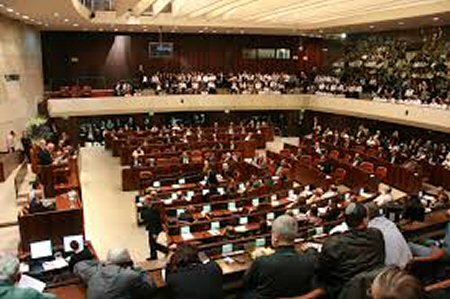 The National Bureau for Defending Land and Resisting Settlements said, in its latest weekly report, that  the ruling Israeli right-wing in Israel is racing time in order to get the votes of the Israelis, particularly those of the settlers. It escalates land confiscation campaigns throughout the West Bank, especially in occupied Jerusalem, using the American protection, ahead of the Knesset election scheduled for next April 9th, as the settlement file occupies an important part in Israel. Accordingly, the gov’t recently ratified the construction of 464 housing units in the Gilo settlement of East Jerusalem, as part of a plan to build more than 4,000 settlement units throughout the city, besides the construction of 23,576 housing units in East Jerusalem, 180 units in Kiryat Yovel and 375 units in Kiryat Menahem. Mayor of Jerusalem Moshe Li’on said, “This is good news for me and for the young couples in the city.”

This report comes after the discovery of other settlement projects in occupied Jerusalem, to which millions of NIS has been allocated for implementation, whereas the so-called “Renovation and Development of the Jewish Quarter” implements Judaization projects worth over NIS 200 million ( i.e. about $ 55 million), including the so-called “Wailing Wall Project” and the “Mosaic of Jerusalem”, all aimed at catering to Talmudic legends in these various neighborhoods, to attract more Jewish tourists and change their features completely,

Those projects include the construction of buildings and houses which the occupation claims date back to the era of the Temple. The project “Beautiful Village” aims to change the features of the “Jewish Quarter”. It is erected on the ruins of the honorary and Moroccan neighborhoods from after the 1967 war, claiming it is infrastructure works and adapting to the Talmudic legend in order to attract Jewish tourists, but, as they said, they are renovating a synagogue which settlers claimed was destroyed in 1948.

Renovation is expected to continue for several years, during which the entire structure will be changed. The height of the building will be 25 meters and the stairs leading to the Buraq wall will be removed by building an elevator. The project will have a total area of ​​2000m2, costing NIS 57 million shekels, and will be completed by 2022.

At the same time, Israel’s right-wing leaders continue to launch provocative calls for annexing C areas and imposing Israeli law on them. Israeli Minister of Justice Ayelet Shaked, one of the founders of the New Right party, with Naftali Bennett, said that Israel should control them. Thus, Israeli citizenship will be granted to half a million Palestinians who will live in peace and can vote in the Knesset. In response to a question on whether the residents of East Jerusalem, about 400,000 Palestinians, would receive full citizenship with the right to vote in the Knesset, Shaked said that the residents of these areas chose to obtain residency only, but, if the Israeli law was applied to them, they would be citizens of the State of Israel, and have the right to vote.

Moreover, the occupation authorities continue applying the ethnic cleansing policy in Jerusalem as they also continue displacing citizens of the Sheikh Jarrah Neighborhood by force, replacing them with Jews through carrying out settlement projects in the city. They uprooted Abu-Assab family from its home that overlooks the Dome of the Rock. They detained the son of Abu-Asab, assaulting him with many other citizens who rushed to stand with the family. The family was forcibly evicted from the house according to a decision issued at the end of last October, though it has owned the house for many decades (i.e. since its displacement from the Al-Baqa’a Neighborhood of West Jerusalem in 1948).

In another context, the Institute for Applied Sciences -ARIJ said that the Israeli War Ministry’s website revealed a series of secret files containing some racist Israeli laws and orders related to the areas of influence of Israeli settlements in the occupied West Bank. The Israeli occupation army deliberately hid them from the owners of the Palestinian lands so they can not reject or object  them in the Israeli courts. Consequently, Israel managed to expand its control over the settlements.

Israel has adopted a number of such racist laws to facilitate the confiscation of Palestinian lands, including a military order on the administration of regional councils in Judea and Samaria, no. 783 and 5739 – 1979, in which five Jewish regional councils were declared in the occupied West Bank, besides establishing local councils in Judea and Samaria, no. 892 and 5741 – 1981, under which local councils were established within Israeli settlements in the West Bank.