(VIDEO) Art as a Form of Nonviolent Resistance: Palestine 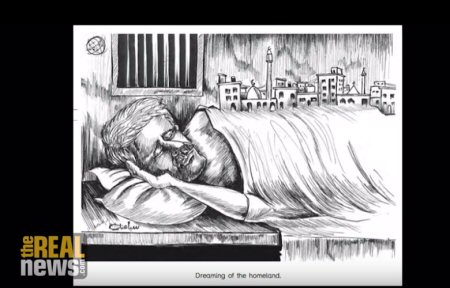 Palestinian political cartoonist Mohammad Saba’aneh talks about his art and its importance to him and to the Palestinian people. Mohammad is the author of White and Black: Political Cartoons from Palestine.

Most media outlets in the U.S. and in Israel this week were harping about President Donald Trump and how he made history by becoming the first sitting U.S. president to visit the Western Wall in Jerusalem’s Old City. It’s a good time to talk about walls, the walls the president is visiting, the wall that Israel has built between Israel and Palestine, the wall that President Trump is planning to expand on between Mexico and U.S., and in spite of these walls and separations, President Trump was apparently carrying the message of peace and unity to Israel and Palestine. Let’s have a look.

Donald Trump: We have before us a rare opportunity to bring security and stability and peace to this region and to its people, defeating terrorism and creating a future of harmony, prosperity and peace, but we can only get there working together.

Sharmini Peries: The Israeli occupation of the Palestinian West Bank and Gaza Strip is now 50 years old. For 50 years, Palestinians have struggled to become free of the occupation, and they used a variety of means of resistance. If we compare the struggles of Palestinian freedom to the occupation struggles in, say, Algeria, Vietnam, or even Kashmir, Palestine stands out as one of the least violent of them. Part of the Palestinian struggle for liberation uses the term culture as resistance. Can art be used as a weapon, or art as a form of unarmed resistance?

For that discussion, in our Baltimore studio today is Mohammad Sabaaneh. He is a Palestinian-born Kuwaiti. He is a painter, caricaturist and a cartoon artist. His cartoons appear in dozens of newspapers and he’s a member of CRNI, Cartoon Rights International Network. Mohammad uses art as a form of unarmed resistance. Mohammad has just published a book of his cartoons titled White and Black Political Cartoons From Palestine. Thank you so much for joining us today.

Mohammad S.: Thank you. Thank you for this invitation.

Sharmini Peries: Mohammad, you grew up in Palestine and you were surrounded by Israeli military arms, tanks, guns, soldiers and so on, and yet you chose to pick up a paint brush, a pencil, and use art as a form of resistance. Tell us about how that happened.

Mohammad S.: Actually, I was born in Kuwait in 1979. Because my family and my parents was in Kuwait, they used to tell me about Palestine through the news about the First Intifada, what’s happening in Palestine, and also my family, especially my mother, used the cartoon of Naji Al-Ali to tell me what’s going on in Palestine during that time. After the first Gulf War, we traveled to Jordan and from Jordan to Palestine.

I think we need to keep our culture alive and the arts as a tool for resistance very strong, because it’s proved that the Palestinian people are human beings and they have a lot of tools to resist against the occupation. That doesn’t mean I drop the right of Palestinian to resist in any way they choose, because they are people under occupation, and we should use all of the kind of resistance against occupation, the longest occupation on this Earth. I think it’s a good tool, and it can reach all of the people around the world, especially most of my cartoon now, without any dialogue, without any text.

It’s very important to convey the suffering to the people around the world, and you can find it out with cartoon in my book without any text, without anything you can understand it and understand what’s happening there. It’s hard to raise your pen in front of the weapon, but that’s what I should do, and all of our artists and writers should do.

Sharmini Peries: Let’s talk about your book, White and Black Political Cartoons from Palestine. You document, in this book, various forms of very, very heartening and deep-felt political art. The collection together feels like an entire movement coming together. Give us your favorite piece in here and describe it for us.

Mohammad S.: Maybe it’s hard to choose one and say that this cartoon or this article is a special cartoon in all of this artwork, but maybe the first chapter, because it was a very long cartoon talking about Palestinian history. I spent around one month just working on this cartoon. It was very hard. I liked some of my artwork, which I used linoleum cut. It is the first time for me to use the linoleum cut, and I felt that most of the people like all of this artwork. I think it is something new and gives my book good artistic value. This is something very important for me not just to convey political message and also to keep it in good artistic form by good cartoon, used by a lot of technique and art tools and style. This is something I tried to do it, and I hope I reach it.

Sharmini Peries: Mohammad, I did the opening to this interview describing President Donald Trump’s visit to Jerusalem, and of course the visit to the wall. In a very timely way, you also have a cartoon with a caricature of President Trump on a wall. Describe that to us, and what you wanted to convey.

I did also against his executive decision that’s banned seven Muslim nations to come to us, to the United States. I did a lot of cartoon about this decision because as a Palestinian we’ve suffered from all of these things, and we hope that the people around the world will not face the same life and the same way to travel between the countries.

Mohammad S.: As you mentioned, more than 1600 Palestinian prisoners, they are on hunger strike to enhance the condition inside the Israeli prison and to have their rights, their needs as a human being. During all my tours, I was talking about the prisoners and asked the people to [inaudible 00:08:55] with the prisoner.

Now, I want to go back to the prisoners, even though I’ve been in the prison for more than five months. I’ve spent around three weeks in solidarity and confinement during the interrogations. Now the conditions inside the cell, it was very hard. They locked the prisoner in small cells, surrounded by rough walls. Even the prisoner cannot lie down on the walls because it’s too rough, and with small, dim lights inside the cell. They just give the prisoner just one thing, broken teeth brush because they think if they give the prisoner a teeth brush, maybe he will use it to kill himself because of this condition. Now, the leaders of this hunger strike, they are in the same condition, the small cell. You can imagine how much it’s hard for one who spend more than now 36 days in this hunger strike in this condition. This is the right for the single prisoner, not just to enhance their condition in Israeli prison … Their rights to be free to release from the prison because a fighter for the freedom. They are … They fight for the Palestinian freedom, for the dignity of all the Palestinian. We should demand that they to be free and to be released from the prison, not just to enhance their condition inside the prison.

It’s hard now to talk about the people spent 36 days now on hunger strike and just to enhance their condition. We should demand to release them from the prison, and this is our duty, and the duty of our leaders, our political leaders. That’s what I believe. That’s what we should work on it.

Sharmini Peries: Right. No one actually is talking about the fact that these are political prisoners. They’re part of a movement, a liberation movement and they’re fighting for, not only their own personal freedoms, but really the freedom of the collective nation.

Give us a sense of whether you have any inclination as to how, or even if, the western media is even covering this hunger strike that’s going on, and the political nature of the prisoners there while President Trump is visiting.

Mohammad S.: Actually, I don’t think that they covering in western media was enough. Most of my friends try to do that … Ada Beruthi, the son of Medouan Beruthi, tried to reach a lot of media. You can also meet him here in Baltimore. He’s a good speaker and he talk a lot with western media. I tried to reach out of cartoonist around the world to tell them about what’s happening to the Palestinian prisoner to cover this thing by their cartoon. I don’t think the covering for what’s happening in Palestine it’s enough because it’s something very dangerous now. I don’t think the situation now with the prisoner is safe. If any bad thing happen for one of the Palestinian prisoner, the situation will not be stable in the West Bank and Palestinian area because they should support the prisoner. They have a family outside, [inaudible 00:13:32] and Palestinian consider them as heroes and as human beings and we should keep them and support them in any way. We should try also to reach all the western media to talk about this thing.

I don’t know if Mr. Trump will know about them or not, or anyone will talk about the Palestinian prisoner, or not. I hope that but … I hope he can see the struggles for the prisoner in front of … Al Mahd church in Bethlehem, they have tent to support the prisoner. I hope he will see it and know what’s happening inside the Israeli prison.

Sharmini Peries: All right, Mohammad. I’ve been speaking with Mohammad Sabaaneh. He is the author of this cartoon book, White and Black: Political Cartoons from Palestine.

I thank you for joining us.

Sharmini Peries: And thank you for joining us here on the Real News Network. Stay tuned to part two with Mohammad Sabaaneh.