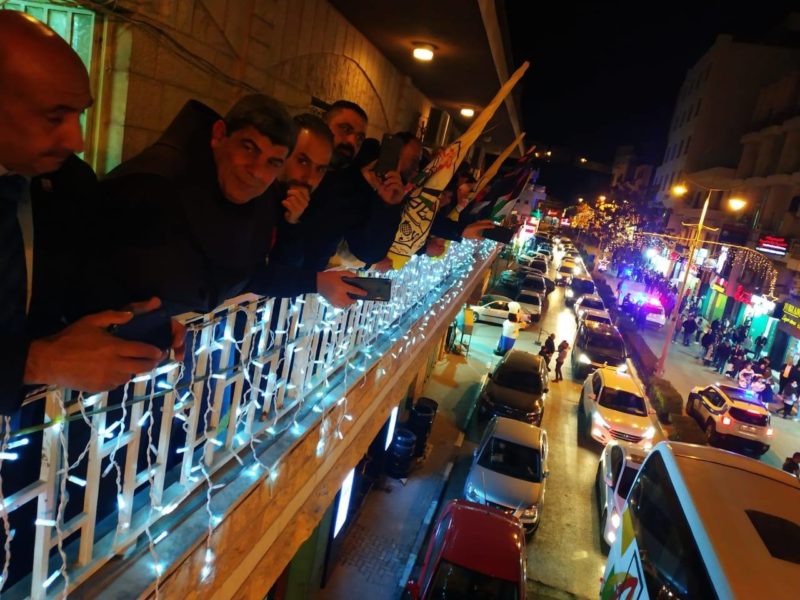 Thousands of people went out to the streets of Bethlehem, to watch the annual Christmas parade touring Palestinian cities.

The parade was launched on Friday evening, with the sound of religious hymns, heading toward Nativity Square, in the presence of official and legal personalities, in addition to families, children, and tourists.

The parade administration confirmed that it is returning today, after an absence of three years, as it seeks to revive Christmas, starting with the cave, the shepherds, Santa, and the games factory, as it departs from Bethlehem to roam several Palestinian cities, including Ramallah, Zababdeh, and Jericho.

Khoury affirmed, in an interview with PNN, that the glorious birthday celebration contributes to the transfer of the Palestinian religious and national message to the whole world, and proves to the world that they are a peaceful people who love life and adhere to its sanctities.

International tourists also attended the parade, to send the world a message of love, joy, and peace.

For his part, governor of Bethlehem, Kamel Hamid, said: “The Palestinian leadership is facing the American-backed Israeli attack against our people, which is the recognition of Jerusalem as the capital of Israel and the transfer of the American embassy to it, the attempts to Judaize Jerusalem, considering the settlements as part of Israel, attacking the Al-Aqsa and the churches, and attempts to eliminate the patriarchs in Jerusalem, continued home demolitions and detention, in contravention of international law.”