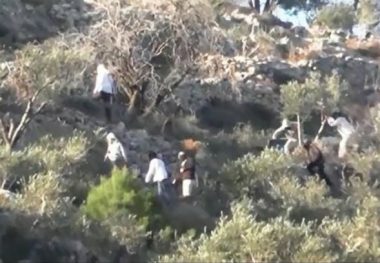 A group of extremist Israeli colonists, illegally living on stolen Palestinian lands in Huwwara and Burin villages, south of the northern West Bank city of Nablus, have cut Saturday more than 110 olive trees, owned by several Palestinians, while Israeli soldiers watched without trying to stop them.

The colonists came from the illegal Yitzhar outpost, which was installed on private Palestinian lands in Huwwara and Burin.

They cut and destroyed more than 110 Palestinian Olive Trees, owned by several Palestinians, before the locals intercepted their attack, and managed to force them out.

A video, filmed by a local Palestinian shows the colonists cutting the trees, while Israeli soldiers stood on top of a small hill, watching them without even trying to stop them.

There have been numerous previous incidents where the soldiers only intervened to attack the Palestinians, and fire at them, when the rushed to rescue their lands, their main and in most cases, their only source of livelihood, and clashed with the invading illegal colonists.